“Hillary Clinton sees me:” The primaries, “identity politics,” and disability 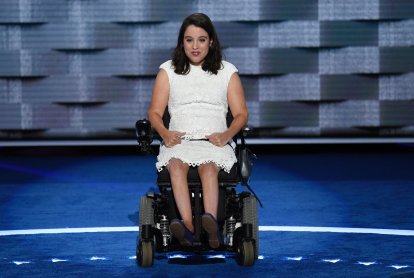 At the Democratic National Convention, disability activist Anastasia Somoza told enthusiastic audience members that “in a country where 56 million people so often feel invisible, Hillary Clinton sees me. She sees me as a strong woman, a young professional, a hard worker, and the proud daughter of immigrants.”

Media personalities, political insiders, and the candidates themselves have talked about the 2016 presidential primaries as a departure from what we normally expect from presidential primaries. The difference is often attributed to how Donald Trump “doesn’t play by the rules” – something we are frequently reminded of by pundits on both the left and right.

But that aside, this presidential primary season saw a growing space for members of minority groups to express their political voice. Maybe this is in part a result of party strategy in targeting and mobilizing the so-called base. Or, because this primary season made issues that disproportionately affect vulnerable minority groups, such as access to education, labor market inequalities and discrimination, more salient. Hillary Clinton’s evolution on disability throughout her campaign is a case in point.

Back in January, I wrote an op-ed for the Huffington Post about what many in the disability community saw as unprecedented inclusion of disability in a presidential primary campaign. As my article’s title suggested however, these may have been new campaign issues, but the concerns raised are not new to people with disabilities. I also claimed that Clinton’s position at the beginning of 2016 was not especially revolutionary – she was not then calling for an end to discrimination that leads to persistent inequalities among people with disabilities. A few months later, Clinton pointed to broader structural causes of inequality as well as attitudinal barriers that create disadvantages for people with disabilities marking a departure from her prior, more modest, focus. Why? One possible reason I put forth was the pressure placed on the Clinton campaign by Bernie Sanders to delve deeper into the issues.

Why did disability become, and to some extent, remain a salient campaign issue? Here are a few thoughts. First, disability fits with Clinton’s message that she has, throughout her adult life, dedicated herself to helping vulnerable and historically disadvantaged people. Second, Republicans like Bush and Kasich had also early on brought disability into the political campaign. Third, Trump’s mocking of New York Times reporter Serge Kovaleski may have further pushed the Democrats to emphasize the contrast between Clinton and Trump when it comes to minority groups. At the Democratic convention, Bill Clinton said that Hillary “never made fun of people with disabilities. She tried to empower them based on their ability.” And fourth, Democrats may see people with disabilities as part of their base despite the community’s political heterogeneity.

Bringing disability into the campaign may no doubt be strategic: it complements the framing of Hillary Clinton as someone who fights for people who are disadvantaged especially her focus on equal access to schooling and social services. It should also be noted though that linking disability to her fight for those “who can’t fight for themselves” risks echoing the historically paternalistic efforts of policymakers and policies motivated by the belief that people with disabilities cannot advocate for themselves– a notion the disability rights movement with the slogan “not about us without us” has fought against. And of course, it remains to be seen if and how disability-related issues make it into the actual presidential campaign and whether this rhetoric will actually turn into real policy change. Nonetheless, there may be a political opportunity here to address the kinds of structural problems leading to labor market segregation and the exceptionally low employment rates and stagnant wages among people with disabilities contributing to persistent inequality.

Is this presidential primary race different? Does it represent, as John Avlon suggested, the “return of identity politics?” This presidential primary season continues to highlight America’s diversity. Asserting and celebrating identities is not at odds with rallying around “being American” as some seem to suggest. Rather, celebrating intersecting and multiple identities is part of American identity.

Earlier in the primary season, as Maxine de Havenon alluded to, new generations of women and members of minority groups concerned with intersectionality – gender, class and race – found it lacking in the Clinton campaign explaining in part the generational gap between Sanders and Clinton supporters. In a similar vein, Daniel Denvir argued that “All of the important struggles that Clinton cites cease to be intersectional the moment they are abstracted from political economy.” It’s a discussion that shines light on the important overlaps between identities and social class. No doubt, members of minority groups face similar challenges and struggles. At the same time, they also face unique sets of concerns and grievances which should rightfully have a place on political campaigns and platforms. For instance, people with disabilities have in fact faced declining employment rates and growing income gaps in the last twenty-six years following the Americans with Disabilities Act. My work with Michelle Maroto shows that women of color with a disability are especially disadvantaged.

The ongoing struggle by traditionally disadvantaged and disenfranchised groups, including people with disabilities, for social, political and economic inclusion in part rests on those efforts at transforming the very differences that are used to exclude members of minorities into the basis for cultural expression and political organization. Somoza herself noted that she is both a person with a disability and the daughter of immigrants. Being on that stage as a person with a disability did not preclude her other identities. Instead, many Americans identify with Somoza’s experiences as a young woman, who comes from an immigrant background (her father Nicaraguan, her mother Irish), and who has a disability. Why shouldn’t the challenges faced by specific minority groups that point to how race, gender, disability and class interact to perpetuate inequalities, be at the forefront of a political campaign?

One response to ““Hillary Clinton sees me:” The primaries, “identity politics,” and disability”