While at the anti-NATO protest I became especially intrigued by the clothes/costumes worn by the different activists – particularly those associated with the “Black Block”/Anarchists.  Clearly, there are important elements of “dressing to impress” and identity formation at work.  They do not all appear to be consistent but they likely never are.

Below are some of the interesting things we observed:

PRO-fessional Revolutionaries
Below one sees that the NFL (National Football League) and MLB (Major League Baseball) are proud “sponsors” of anarchists, an essential component of any radical wardrobe.  I wonder about the teams.  There are also some uses of head scarves found in the Middle East (does anyone know what the light green one represents?)

COVERings Are a Must
The hoodie is a major part of the anarchists wardrobe as is the generally black bandana (the former guards against identifying tatoos; the latter guards against facial recognition – very few wrinkles in either).  Matched with the “power” black is the “evil” red.  Note that while they are color coordinated, they are not identical.  Some are accented with chrome (messenger bags), some have gas masks, some have dark glasses and some wrap their heads.  I am not sure what the tribal logo represents on the green hat toward the front. 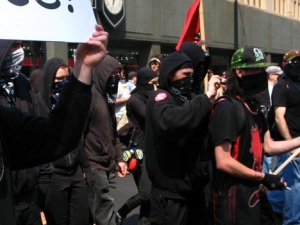 All in the Shoes
Check out the anarchist sporting the “timbos” (Timberlands) – on the right.  Clearly the individuals holding the banner do not shop at the same locale. 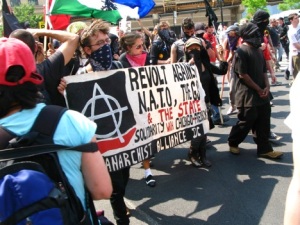 One response to “Black Block Fashion: Do’s and Don’t’s”