Legal Mobilization and Policy Enforcement: A Tale of Two Policies and Two Movements?

Scholars have long debated the role of social movements in changing policy outcomes – whether and how do they matter. Policies can also create political opportunities for social movements. Policies empower historically disadvantaged groups and provide them with the tools and resources to mobilize their rights. Indeed, as David Meyer put it, scholars often grapple with the “chicken-and-egg” problem of policy and mobilization; that is, which comes first? Thinking about this alleged paradox raises questions about the role of social movements following legislative “victories.”

Approaching this question involves understanding the politics of policy implementation and enforcement. For example, despite fifty years of anti-discrimination legislation, the issue of employment discrimination based on sexual orientation is far from resolved. Indeed, while some states prohibit discrimination based on LGBTQ status, the Civil Rights Act does not explicitly do so at the federal level. Two recent lawsuits filed by the Equal Employment Opportunity Commission (EEOC) based on complaints of alleged anti-gay discrimination might symbolize “the next big legal fight for LGBTQ rights” according to a recent Vox article by German Lopez.

LGBTQ activists look to the EEOC with hope as a sympathetic institution helping to advance their cause – and perhaps rightfully so. It seems the agency is seeking an interpretation of existing antidiscrimination policy – namely “sex” under the Civil Rights Act– to include sexual orientation as grounds for discrimination.

In the wake of recent victories across U.S. states around same-sex marriage, and for those who were asking what’s next for the movement, employment discrimination may reflect a new political and legal opportunity for LGBTQ activists to shape existing policy by effectively mobilizing the law. If these EEOC cases or other cases make it to the Supreme Court and the Court rules in favor of the EEOC’s interpretation of the Civil Rights Act, it could mean the Congress may have to reopen the Civil Rights Act.

But not all activists and advocates can rely on enforcement agencies and the courts to interpret existing legislation in favorable ways. Disability rights are a particularly salient example of this. In past Mobilizing Ideas essays (“The ADA at 25” and “The When, Why and How of Legal Mobilization”) and in a USA Today op-ed, “How to Aid the ADA,” I argued that persistent labor market inequality among people with disabilities is in part attributable to the failure of enforcing the Americans with Disabilities Act (ADA) by the executive branch and the Court rather than the failure of Congress to enact legislation. Unlike the LGBTQ case, disability rights is more so an example of the failure of the judiciary to implement the well-meaning policy intentions of Congress.

Some have argued that the problem originated with Vanik and Humphrey’s failed amendment in 1971-1972 to include disability as grounds for discrimination in the 1964 Civil Rights Act. This led to what critics call a “separate and unequal” policy trajectory for disability rights, first with the 1973 Rehabilitation Act, and then eventually with the 1990 ADA.

No doubt these policies reflect political and movement victories. However, this parallel system allowed the executive branch and the courts  greater  leeway in interpreting and enforcing civil rights for people with disabilities. Since the ADA took effect in 1992, the EEOC has received many complaints based on alleged violations of the ADA as the figure (from Maroto and Pettinicchio 2014) below suggests. 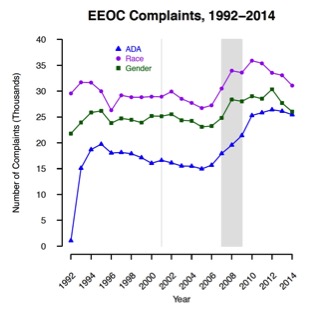 Ironically though, while Lopez writes that the Court sees the EEOC as an expert advisory board, despite the considerable number of ADA-based complaints, the Court has often overrode or simply dismissed EEOC interpretations of the ADA in employment discrimination. Based on findings from a 2014 paper in Law and Policy by my colleague Michelle Maroto and I, two-thirds of cases where the Supreme Court reversed, remanded or vacated a lower court decision involved lower court decisions that ruled in favor of the plaintiff. This suggests that employers and others were able to use the courts to overturn decisions they saw as unfavourable. Looking at Supreme Court cases overtime demonstrates significant differences in how the judiciary understands rights and antidiscrimination based on different status characteristics – a concern that many argue is intensified by the fact that people with disabilities are judged under a separate policy. Would the courts have been able to rule so differently on disability had it been included in the Civil Rights Act?

From black civil rights, to abortion rights, to environmental protection, to disability rights, new politics arise around enforcing new laws. These examples remind us of how policy enforcement (or lack thereof) can create new opportunities for legal mobilization. Not surprisingly, given the positive role of the judiciary in same-sex marriage and the EEOC’s position on discrimination based on LGBTQ status, the LGBTQ movement found an ally in the struggle for equal rights.

Yet, the politics of policy enforcement reveals a lot about how movements see enforcement agencies and the courts. Historically, it has been legislators – members of Congress – who have rallied around rights for people with disabilities while the courts have been seen as resisting enforcement of Congressional intent. This was obvious in the hearings held around the ADA Restoration Act of 2008 – the colloquial title itself suggesting policymakers’ position vis-à-vis the courts. This resistance has not significantly mobilized the disability rights movement though. This might be because the ADA – touted as the last great civil rights law – closed the issue of disability rights. It may also be a result of a sense of inefficacy in mobilizing the law whereby groups have been unsuccessful in shaping judicial outcomes.