Legal Mobilization and Policy Enforcement: A Tale of Two Policies and Two Movements?

Scholars have long debated the role of social movements in changing policy outcomes – whether and how do they matter. Policies can also create political opportunities for social movements. Policies empower historically disadvantaged groups and provide them with the tools and resources to mobilize their rights. Indeed, as David Meyer put it, scholars often grapple with the “chicken-and-egg” problem of policy and mobilization; that is, which comes first? Thinking about this alleged paradox raises questions about the role of social movements following legislative “victories.”

END_OF_DOCUMENT_TOKEN_TO_BE_REPLACED

Following the Supreme Court’s recent decision legalizing same-sex marriage nationwide, what are the next steps for the LGBT rights movement?

Over the past few weeks, scholars, activists, and politicians alike have begun pondering the path forward for the LGBT movement. In a recent symposium over at Contexts for example, a group of sociologists considers several possibilities for the LGBT rights movement, including renewed focuses on employment and housing discrimination, youth homelessness, violence against the trans community, and intersectional justice. While a small number of activist organizations such as Freedom to Marry have announced that they will now shut down as a result of marriage equality being achieved, most LGBT rights organizations have signaled that they will continue to fight for legal and cultural equality in other social realms – although they don’t yet agree on what their priorities should entail. END_OF_DOCUMENT_TOKEN_TO_BE_REPLACED

Google doodle draws attention to gay rights and the 2014 Olympics 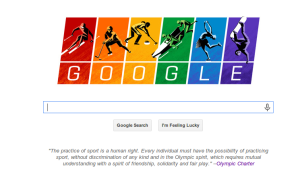 As a follow up to Lisa Leitz’s post about the same sex marriages featured at the 2014 Grammy Awards, I want to draw attention to Google’s homepage “doodle” which “honors” the 2014 Winter Olympics in Sochi. The doodle highlights six winter sports and, critically, is set against a rainbow background. Below the search bar is a quote from the Olympic Charter: “The practice of sport is a human right. Every individual must have the possibility of practicing sport, without discrimination of any kind and in the Olympic spirit, which requires mutual understanding with a spirit of friendship, solidarity and fair play.”

Anyone who has been following politics around this year’s Olympic games will recognize this as a not so subtle dig at Russia’s anti-gay laws and the general treatment of gay athletes leading up to the games. The political nature of the Google doodle has been picked up by a number of news sources, and one news source noted that the doodle was on the Google Russia homepage.

I think this, as with the same sex marriage event at the Grammy Awards, is a sign of the mainstreaming of LGB rights, but is also a sign that the protests against Russia’s anti-gay laws have been successful at drawing attention to the issue. Even Bob Costas mentioned the controversy around these laws on the first night of Olympic coverage, Thursday night. While the Google doodle will do little to concretely change the situation in Russia, I think it should be celebrated, and certainly should be seen as a win for gay rights advocates. But, I’m open to other interpretations. Thoughts?

When do social movements use the courts in pursuing their goals? The question might be rewritten to say: assuming that activists will always or often use the courts as one of many strategies, when are they successful in court? When is the law likely to change in response to activist’s lawsuits? This is a pertinent question as we see the U.S. Supreme Court taking up two cases about marriage equality.

One case is about Proposition 8, which took away the right for same-sex couples to marry in California (Hollingsworth v. Perry), and the other case (U.S. v. Windsor) is about the Defense of Marriage Act (DOMA) END_OF_DOCUMENT_TOKEN_TO_BE_REPLACED

Beware of Lawyers Bearing Gifts, or Why Social Movements Should Be Wary of Litigation

The U.S. Supreme Court is expected to rule later this spring on issues concerning same-sex marriage. Whatever the Court decides, its decisions will be momentous. This fact brings to mind an intriguing topic in the law and social movement literature for social movement scholars and activists to consider: the degree to which litigation (or legal mobilization, to use a favored term in the literature) is a potentially effective strategy for achieving social movement goals. In view of the impending Court decisions, certain observations, based on a growing body of work by legal and social movement scholars, seem in order. END_OF_DOCUMENT_TOKEN_TO_BE_REPLACED

Same-Sex Marriage Reaches the High Court: Comments on Law and the LGBT Movement

In December of last year, the Supreme Court announced that it would hear two cases involving same-sex marriage.  One case challenges the constitutionality of the Defense of Marriage Act (DOMA), the 1996 statute that defines marriage—for federal benefits purposes—as one man and one woman.  The other case challenges the constitutionality of California’s Proposition 8 that prohibits same-sex marriage in the nation’s largest state, and which could result in a revolutionary, across-the-board ruling requiring all states to recognize same-sex unions.

Given where things stood just 10 to 12 years ago, the very possibility that the Supreme Court might consider legalizing same-sex marriage is nothing short of astounding.  END_OF_DOCUMENT_TOKEN_TO_BE_REPLACED

On Emotional Disaffection, Humiliation and Anger, Transfer of Loyalties, Emotions Management in Movements, and Courage

To account for the emergence of social movements one rarely starts with these movements themselves but instead with their context and/or creators – treated as explanations for mobilization.  In terms of context, for example, differing economic and/or political resources, favorable political opportunity structures, developing protest cycles or networking have served to explain movement mobilization. In terms of creators, successful movement organizing or mobilizing have been explained by, for example, the “right” decisions of the “movement entrepreneurs” to invest limited movement resources, the capacity of “movement intellectuals” to produce and disseminate new knowledge, the ability of the leaders to “frame” reality to fit that of the potential movement members while emphasizing the urgency and the efficacy of collective action, etc.

From the emotions perspective the context is constituted by the relations of domination and their emotional underpinnings. Let me illustrate. END_OF_DOCUMENT_TOKEN_TO_BE_REPLACED