Where is Wall Street? Let the Crowd Tell Us 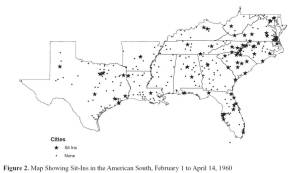 Map of locations of sit-ins in southern US cities, from Kenneth Andrews and Michael Biggs' 2006 American Sociological Review article "The Dynamics of Protest Diffusion."

Recent efforts to add a geo-spatial dimension to studies of protest have given social movement scholars the chance to draw some really interesting conclusions. Dan Myers and Beth Caniglia found how close your protest needed to be to New York City to have a hope of appearing in the New York Times. Kenneth Andrews and Michael Biggs determined how sit-ins rapidly diffused from city to city in the south in 1960. And Robert Sampson, Doug McAdam, Heather MacIndoe, and Simon Weffer-Elizondo established what neighborhood characteristics really mattered in where collective action occurred over 30 years in Chicago. While these studies asked different questions and focused on different places, they had one major component in common: they hinged on the painstaking collection of data from a variety of sources to identify the location and characteristics of large numbers of protest events. END_OF_DOCUMENT_TOKEN_TO_BE_REPLACED