During the January 26, 2014 Grammy Awards Queen Latifah presided over 33 couples that wed during Macklemore, Ryan Lewis, and Mary Lambert’s “Same Love” mashup with Madonna’s “Open Your Heart.” Recent posts have critiqued the heteronormativity in both CBS news coverage and the Grammy focus on the straight stars in the event and its de-politicization of the song.

While others have analyzed the political message of the song to conclude it as barely more than straight “rappers” heralding the assimilationist agenda of HRC, I look around my current rural state of Arkansas and can’t help but wonder- can we understand the Grammy Weddings to be a political tactic or are they merely feeding the pocketbooks of already-mega-rich pop stars? END_OF_DOCUMENT_TOKEN_TO_BE_REPLACED 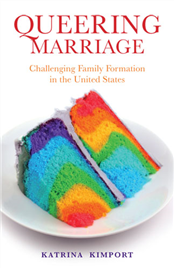 Chances are, you remember the flurry of news coverage about San Francisco’s 2004 same-sex weddings, in which over 4,000 same-sex couples wed. In news images, throngs of men and women lined up outside city hall. Jubilant couples radiated with anticipation of becoming legally wed. Brides posed with San Francisco mayor Gavin Newsom. Soon, protests for the legalization of same-sex marriage emerged across California and the United States. The excitement was palpable and change was in the air. But, if you were like many people, you may have wondered: Are the same-sex couples who are so passionately fighting to get married motivated by love and devotion to their partners? Is it as an act of protest to gain the rights and privileges bestowed upon different-sex couples? Or, does same-sex marriage uphold heteronormativity or challenge it? END_OF_DOCUMENT_TOKEN_TO_BE_REPLACED