New Book Release: A Trump Book not about Trump

The Politics of Losing: Trump, the Klan, and the Mainstreaming of Resentment 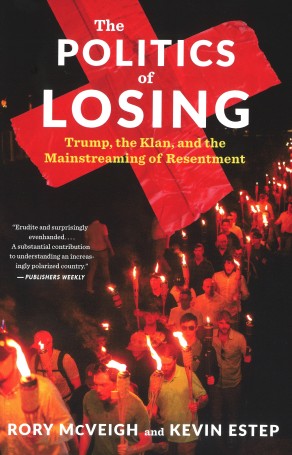 “Trump Books” seem to be a dime-a-dozen since the 2016 presidential election, however, McVeigh and Estep offer something different.  They examine not the man, but Trump Supporters and the emerging structural conditions in the United States that he appealed to.  Building on McVeigh’s previous work on power devaluation theory and the Ku Klux Klan, McVeigh and Estep’s new book analyzes the parallels of the Klan of the 1920’s and Trump support today.  With a global reemergence of right-wing movements, their book investigates a topic that is timely for scholars in many contexts.

Summary:
The Ku Klux Klan has peaked three times in American history: after the Civil War, around the 1960s Civil Rights Movement, and in the 1920s, when the Klan spread farthest and fastest. Recruiting millions of members even in non-Southern states, the Klan’s nationalist insurgency burst into mainstream politics. Almost one hundred years later, the pent-up anger of white Americans left behind by a changing economy has once again directed itself at immigrants and cultural outsiders and roiled a presidential election.

In The Politics of Losing, Rory McVeigh and Kevin Estep trace the parallels between the 1920s Klan and today’s right-wing backlash, identifying the conditions that allow white nationalism to emerge from the shadows. White middle-class Protestant Americans in the 1920s found themselves stranded by an economy that was increasingly industrialized and fueled by immigrant labor. Mirroring the Klan’s earlier tactics, Donald Trump delivered a message that mingled economic populism with deep cultural resentments. McVeigh and Estep present a sociological analysis of the Klan’s outbreaks that goes beyond Trump the individual to show how his rise to power was made possible by a convergence of circumstances. White Americans’ experience of declining privilege and perceptions of lost power can trigger a political backlash that overtly asserts white-nationalist goals. The Politics of Losing offers a rigorous and lucid explanation for a recurrent phenomenon in American history, with important lessons about the origins of our alarming political climate.

Available Now on Amazon.com:
McVeigh, Rory, and Kevin Estep. 2019. The Politics of Losing: Trump, the Klan, and the Mainstreaming of Resentment. New York: Columbia University Press.

Sunrise Movement and the road to the Green New Deal

On a rainy Sunday the weekend after the 2018 midterm elections, some two hundred young people filled the pews of St. Stephen & the Incarnation Episcopal Church in Washington D.C. The young faces chanting and singing in the pews belonged to the Sunrise Movement, a new movement of young people fueled with anger at four decades of political inaction on climate change. Politicians on both sides call them naive for demanding change. The next day, they planned to protest and lobby the new Democratic majority, notably the soon-to-be leader Nancy Pelosi, to back what they called a Green New Deal. The plan calls for a nothing less than WW-II-scale mobilization to transform the American economy to 100% renewable energy in just 10 years. END_OF_DOCUMENT_TOKEN_TO_BE_REPLACED

Parkland is increasingly portrayed as the mass shooting that will finally change things, but are pro-gun supporters right to claim that it is but another headline that gun control advocates are allegedly peddling will bring stricter gun control laws? END_OF_DOCUMENT_TOKEN_TO_BE_REPLACED

This year saw numerous episodes of mobilization by immigrants and non-immigrants alike. In Sweden, protesters mobilized against police in a predominantly immigrant neighborhood of Stockholm. Protesters in Cologne, Germany organized against the anti-immigration party, the AfD. London protesters held an event at the U.S. embassy in London against Donald Trump’s “Muslim ban.” And, protesters in the U.S. mobilized against Trump and his administration’s views and positions on immigration with “A Day Without Immigrants.” END_OF_DOCUMENT_TOKEN_TO_BE_REPLACED

Failure Is Not an Option

Asking why social movements fail is a little like asking why children do not have backyards full of ponies. Most social movements fail most of the time because they embody a recipe for failure: they combine ambitious goals with severe power deficits. In U.S. history alone, think about the communist, nativist, gun control, anti-alcohol, and prison-reform movements—failure, failure, failure, failure, and failure. With global warming continuing unchecked, a good case could be made, too, for the environmental movement as a failure. Even movements widely considered the most influential of the twentieth century—the labor, African-American civil rights, and feminist movements—have been so only partially or intermittently. END_OF_DOCUMENT_TOKEN_TO_BE_REPLACED