Collective action is alive during the pandemic. But in which social movement areas? One obvious category is public health: Those who demand more public health measures might take online action, and those who oppose protective measures might take to the streets. Either side might target state actors or fellow citizens. The second category that comes to mind is labor. As the pandemic disrupts life, the measures were taken against the spread of the virus (or their lack thereof) lead to economic depression and rising unemployment. We would expect labor-related protests as a result. These are the usual suspects, how about the unusual ones?

Environmental emergency, democracy, anti-racism, and women’s rights seem to trigger protests across the globe. The activists’ perception of urgency might lead them to take to the streets amidst a pandemic. Despite the restrictions.  Despite the de facto media blackout on news not related to Covid-19, especially in the first few months of the pandemic. All the while, the pandemic driven state of emergency measures and media’s focus on Covid-19 related news might lift some of the pressures policy makers face in other policy areas. In other words, social movements face more obstacles to be heard and politicians risk less punishment for ignoring the movements’ demands.

As scholars of social movements, we need to focus on the indirect impact of Covid-19 measures on collective action as well. Across the globe. Here are two strikingly similar cases of urban development and environmental policy from my comparative project: Brazil and Turkey (see here for a snapshot on collective action in Turkey). In both of the countries, during the first months of the pandemic, the national governments continued their “development” policies, which environmental groups vehemently opposed. In Brazil, the topic was the deforestation of the Amazon. In Turkey, it was the Canal İstanbul project that aims to create a second Bosphorus in İstanbul. Ricardo Salles, the  Brazilian environment minister, argued that the pandemic was a great opportunity to push for unpopular measures, which might likely get blocked in congress. For him, the pandemic was the right time for these policy changes because media focused solely on Covid. Similarly, in March, the Turkish government held a tender for the Canal İstanbul project at a time when schools were shut down and weekend curfews were introduced in Turkey. It lead to an outcry from environmentalist groups claiming that the government took advantage of a public health crisis.

These examples show just one aspect of the indirect impact of the pandemic on the ability of the social movement actors to pressure state actors. Their room to maneuver is severely restricted as it is harder to gather media’s attention, coordinate protests on the streets, or influence agenda-setting in general.

This year saw numerous episodes of mobilization by immigrants and non-immigrants alike. In Sweden, protesters mobilized against police in a predominantly immigrant neighborhood of Stockholm. Protesters in Cologne, Germany organized against the anti-immigration party, the AfD. London protesters held an event at the U.S. embassy in London against Donald Trump’s “Muslim ban.” And, protesters in the U.S. mobilized against Trump and his administration’s views and positions on immigration with “A Day Without Immigrants.” END_OF_DOCUMENT_TOKEN_TO_BE_REPLACED

The ADA at 25: Why Movements Matter Following Legislative “Victories” 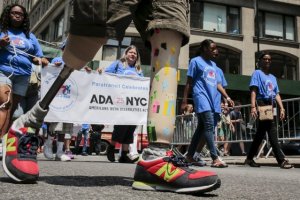 Movement scholars have become increasingly interested in the ways in which social movements directly shape the policy agenda; that is, what role they play in how issues gain prominence in the government and how these issues get framed. Much of the focus has been on the relationship between increasing movement activity, such as organizational expansion, protest and lobbying, and increasing resources government allocates to an issue.

However, less is known about the link between movement mobilization and actual legislative promises once policies are enacted, especially in light of subsequent demobilization and issue decline. It’s important to draw attention to this less developed area of study given the renewed interest in defining successful social change and whether movements are themselves successful in influencing these (policy) outcomes.

Take for instance, the case of disability employment anti-discrimination legislation. The Americans with Disabilities Act (ADA) was proclaimed the “emancipation proclamation” for people with disabilities and the most significant civil rights law since the 1964 Civil Rights Act. Not surprisingly, it was seen as an important victory for disability advocates in the government and for the disability rights movement. But, in a recent op-ed for USA Today, I argued that when it comes to employment and earnings outcomes, the ADA has failed to deliver. END_OF_DOCUMENT_TOKEN_TO_BE_REPLACED 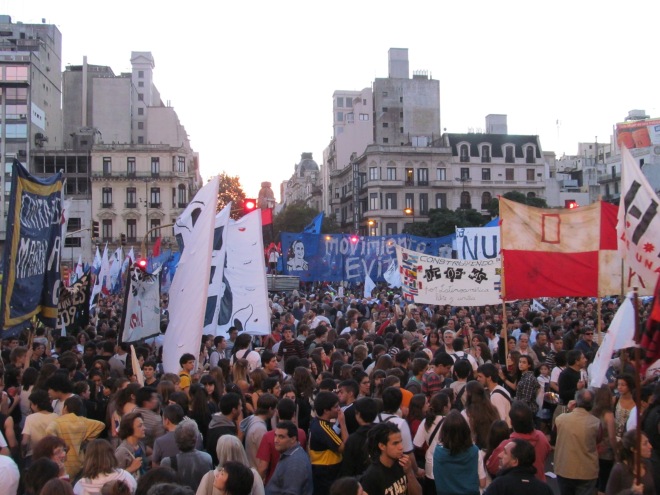 END_OF_DOCUMENT_TOKEN_TO_BE_REPLACED

In light of the recent proliferation of mass mobilization events like Occupy/99%, immigrant rights, the Arab Spring, and the Ukrainian protests, many interested in social movements have turned their attention to protest participation. No doubt, this new wave of protest research has provided important theoretical insights on mobilization as well as methodological advancements.

However, scholars have also recently pointed to important organizational and institutional aspects of social movements and social change that should not be overlooked. In fact, the two recent Charles Tilly Book Award winners, Drew Halfmann and Kathleen Blee, address these very aspects of mobilization.

The tortoise and the hare: institutions, policy and social change

I have been working on a project about policy innovation in the U.S. (even though it’s often considered “reluctant” or a “laggard” especially in social policy).  The case I focus on is disability rights. The idea that the U.S. is a policy leader has become difficult to sell in light of the countless articles and media reports about the 113th Congress being the most unproductive in decades and the partisan conflicts and gridlock characterizing Congress.  Not to mention the fact that about a year ago, the Senate failed to ratify the UN Convention on the Rights of People with Disabilities (see my December 2012 post “Is anyone really against persons with disabilities?”). Ironically, the language of the Convention was based on the 1990 Americans with Disabilities Act – thought of by many as the most important piece of civil rights legislation enacted since the 1964 Civil Rights Act. The rights language of the ADA also subsequently informed similar laws in Australia and the U.K. 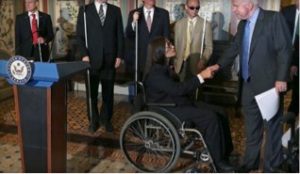 But it is not the only policy area in which the U.S. is a leader rather than a laggard. I’d like to thank Maureen Eger for pointing me to a recent New York Times article by economics professor Tyler Cowen (Dec 21, 2013). Cowen argues that despite the emphasis on congressional gridlock which either leads to policies nobody wants or no policies at all, the U.S. is better characterized as having periods of “creative ferment” followed by periods of controversy, conflict and retrenchment more akin to a lunging and lurching than political immobility or gridlock. When it comes to handling the financial crisis, environmental policy, intellectual property, and national security/defense, the U.S. has acted rather swiftly. Conflict that may prohibit effective policy implementation typically occurs after bursts of attention and initial legislative output. END_OF_DOCUMENT_TOKEN_TO_BE_REPLACED

The When, Why, and How of Legal Mobilization

“Is anyone really against persons with disabilities?”

On Wednesday, Dec. 5th, I defended my dissertation which asked the following question: “Why is the U.S. an innovator in disability rights?” Although I could not help but rethink my answer to this question in light of the Senate voting against ratifying the U.N. disability treaty the day before, I still posit that the U.S. was an innovator on disability rights compared to other western industrialized countries.

Without getting into the history of disability and disability rights in America, it is important to note that political entrepreneurs played a critical role in the late 1960s and early 1970s in reframing disability as a minority group entitled to rights. END_OF_DOCUMENT_TOKEN_TO_BE_REPLACED

Summers in Montreal usually mean festivals; whether Just for Laughs or the Jazz Fest. But, with an impending election, Montrealers this summer are wondering whether student protests will influence the upcoming Québec provincial election. Protests were first activated by the threat of a tuition hike, but quickly became about something bigger (see my May 10th post). One development has been the so-called radicalization of the protests, particularly organizations like CLASSE, accused of undermining negotiations with the government and as being aligned with the current opposition party, the sovereigntist Parti Québécois. It became clear, fairly early on, that the greatest obstacle for student protesters was convincing Quebeckers that the protests were more than just about tuition, that they are symptomatic of a bigger socio-structural problem, and that disruption is necessary (see my May 25th post). Unfortunately for protesters, public opinion has not been on their side. END_OF_DOCUMENT_TOKEN_TO_BE_REPLACED

A few weeks ago, students in Montreal protested against the tuition increase proposed by the Québec government.  But might there me more to this student mobilization than simply a protest against a fairly small (particularly by US standards) increase in tuition? A series of recent newspaper articles allude to this possibility by calling into question “the real” nature of, or motivation for, student mobilization.

Although the government and student leaders called a truce, protest, which included vandalism, continued.  An April 26th Globe and Mail article by Alexander Panetta claims that “the latest events prompted questions about whether the student leaders actually control the movement they spearheaded.”  CLASSE, which is considered a hard-line student group, was excluded from negotiations with the government because they continued to promote protest despite the education minister’s ultimatum. CLASSE’s spokesperson claims that the government really had no intention of negotiating which is why they have continued to promote the use of disruptive tactics. END_OF_DOCUMENT_TOKEN_TO_BE_REPLACED