While constructing a course syllabus on “Social Movements in East and Southeast Asia,” I have been re-reading some news articles, popular analyses, and academic theorizing on the recent waves of protest in the region, including Mobilizing Ideas’ dialogue in December 2014 and January 2015. Since the turn of the decade, East and Southeast Asia has been the site of massive mobilizations, generating huge turnouts from millennials. Youth activism was crucial in the campaign for electoral reform in Malaysia, especially in the Bersih 2.0 rally of 2011. In the 2014 Hong Kong protests, the pro-democracy movement consisted predominantly of high school and college students, who were participating in street demonstrations for the first time and had no recollection of the 1989 Tiananmen protests or other contentious episodes in China’s (or Hong Kong’s) history.

In the summer and fall of 2015, Japan witnessed one of the largest protests in Tokyo in recent years, as Prime Minister Shinzo Abe attempts to “reinterpret” Article 9 of the Japanese Constitution, which outlaws war as a means to settle international disputes involving the state. Such a movement had not emerged in Japan since the anti-war protests of the 1960s. The charter has been the basis for Japan’s 70-year neutrality and non-intervention since the end of World War II. Indeed, pacifism has shaped the nation’s brand, enhancing its leadership status in the international community.

Like the protests in Hong Kong, students were at the forefront of the movement. They were from elite private colleges, like International Christian University, Meiji Gakuin University, and Sophia University. They were first-time protesters with no memory of World War II and its immediate effects to Japanese society and collective psyche. Similar to other huge mobilizations in the last five years, technology played a central role in the development and spread of the movement.

But what is fascinating about the Japanese anti-war protests is the ways by which one of the main youth organizations—the moderate and non-partisan Students Emergency Action for Liberal Democracy (SEALDs)—has carved a recognizable identity for the movement, one that appeals to Japan’s young population and to the global network of contemporary social justice activists. Noticeable is the use of English in its calls and demands printed in flashy placards designed by students, who claim to be influenced by street culture like hip hop and skateboarding, John F. Kennedy, and The Beatles. SEALDs is deliberate in the minimalist but stylish packaging of the organization and its messages, which has facilitated name-recall and association. It also deployed slogans like “This Is What Democracy Looks Like,” “Give Peace A Chance,” and “I Can’t Believe We’re Still Protesting This S!@t,” which have been used in protests against austerity, racism, militarization etc. in North America and Western Europe.

Lastly, SEALDs has incorporated the members’ interests in fashion, music, and other forms of popular culture in its performance of protest. For instance, in one of its promotional materials, activists looked like models for the SEALDs clothing brand, declaring “War Is Over If You Want It” minus the Christmas greeting from John Lennon and Yoko Ono (Photo 1). Another one used the lyrics from “Take the Power Back,” a song released in 1991 by American political rap metal band, Rage Against the Machine (Photo 2). And in its official website, SEALDs makes protesting look in vogue with activists in urban-hip, vintage-style clothes, the opposite of raggedly-dressed anti-war militants in the 1960s who paid less attention to their looks (Photo 3). In all these, the colors are appealing and the messages are easily digestible. SEALDs as a brand signifies the modern and timeless significance of protest. 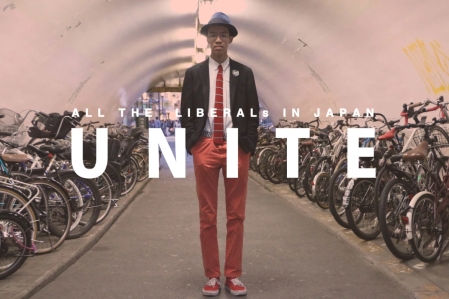 A professor of politics observed the effectiveness of SEALDs’s hipster approach in galvanizing the largely apolitical Japanese youth, stating, “SEALDs projects the image that you can be normal and fashionable and political at the same time.” But some have criticized the group for reducing complex issues to trendy visuals and catchy sound bites and thus attracting groups and individuals with little understanding and commitment to the cause. The branding also inadvertently uncouples the movement from its origins. The peace movement in Japan is deeply rooted in the humanitarian catastrophes during World War II, especially the horrors of the Hiroshima and Nagasaki bombings—events that shaped the older generation’s activist identities. Japanese activists have been influential worldwide, especially in campaigns towards achieving global nuclear disarmament. In framing their issues, they drew from personal experiences, family narratives, and localized collective memory of the past.

Developing a brand is not new in movement politics. In her study of abortion politics, Deana Rohlinger discusses how Planned Parenthood created a brand in the 1980s to sustain media attention. From the Occupy movements to the Arab Spring, the Guy Fawkes mask has become a shared symbol among activists, facilitating solidarity and the branding of global dissent. But how can branding capture both contemporary relevance and historical continuity, especially on an issue that has defined a nation’s identity? Does movement branding for media visibility, recruitment, and global solidarity run the risk of conformity and detachment from local histories? Can branding work against a movement?