The street protests in Istanbul has forcefully revived in the past few weeks, reminiscent of the Gezi protests in Summer 2013. On Sunday, protesters in Taksim Square was shouting in tandem: “Do not touch my Internet!” 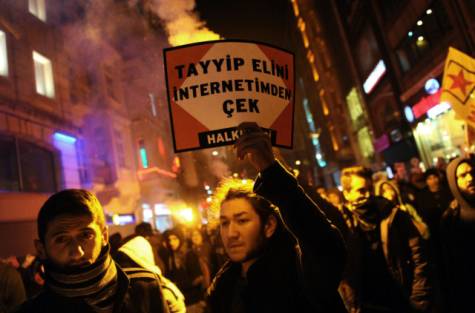 The recent political crisis that began after a major graft probe in Turkey has now a new arena of contestation: Web activism. The ruling AKP government has increasingly been freaky about circulation of news about the corruption. Here is the first few sentences of a recent New York Times article on the issue:

Shortly after an audio recording in which Prime Minister Recep Tayyip Erdogan is said to be heard talking about easing zoning laws for a construction tycoon in exchange for two villas for his family, SoundCloud, the file-sharing site where it was leaked last month, was suddenly unavailable to Internet users in Turkey.

Other recordings, also apparently from wiretaps connected with a corruption inquiry linked to Mr. Erdogan and those close to him, have shown up on YouTube, Vimeo, Twitter and other social media sites. Often, just as quickly as they appear, they disappear, only to show up soon after somewhere else on the Internet, like a game of Whac-a-Mole. END_OF_DOCUMENT_TOKEN_TO_BE_REPLACED

The use of the internet by contemporary social movements is providing immense amounts of data to social movement scholars, and more and more researchers are devoting their energy to studying this phenomenon. The size, scale, and richness of these data, however, present a number of methodological hurdles. Alex Hanna highlights some methods we can use to analyze the content of text-based internet data–using Facebook as a case study–in his article “Computer-Aided Content Analysis of Digitally Enabled Movements” (Mobilization: An International Quarterly 18(4): 367-388, 2013).

Hanna did an immense amount of work to prepare his data for analysis, he thought carefully about his methods, and his descriptive statistics go a long way toward an empirical understanding of the way social movements use Facebook. His article is a great introduction to automated text analysis methods and is an example of how these methods can be used to study social movements and internet data. END_OF_DOCUMENT_TOKEN_TO_BE_REPLACED

The Racialist Movement: Past and Present Strategies, Opportunities, and Constraints

The constraints that are faced by the current racialist movement are in many ways the same that they have always historically faced:  governmental and countermovement opposition, negative publicity, movement infighting, etc.  Looming great over these is the bifurcation within the movement concerning the strategies and tactics that they feel should be used to achieve movement goals.  Namely, should they be focusing upon legal or extralegal actions?  Should they go underground, engaging in violence, or try to gain power through the political process? The path chosen can greatly affect recruitment, mobilization efforts, and the likelihood of success. END_OF_DOCUMENT_TOKEN_TO_BE_REPLACED

By Betty A. Dobratz and Lisa K. Waldner

We focus on a few aspects of a very complex set of questions about recruitment in the white power movement (WPM), including cultural influences on the WPM, whether framing of recruitment strategies have changed, and what the future may hold for the WPM.  We discuss the perceptions of WPM members (WPMMs) in part because we agree with W. I. Thomas’s Theorem that perceptions can have real consequences whether rooted in fact or not (Robertson 1981:289).

We believe it important to place possible changes in WPM recruitment strategies in a broad historical and cultural perspective recognizing that societal changes beyond the control of movement members have affected WPM framing of issues.  END_OF_DOCUMENT_TOKEN_TO_BE_REPLACED

It has by now become commonplace to interpret the June Days of Brazil (the surprisingly massive mobilizations that occurred in over a hundred cities between June 6 and July 1, 2013 to protest government failure and fraud, and to call upon the state to fix Brazil’s broken public services), as an expression of deep-seated dissatisfaction on the part of the new middle class, fruit of the PT’s policies over the past decade,  now paying up to a quarter of their income in taxes, with the sorry state of their nation’s public services. It has also been common to point to the horrifically wasteful sums of public monies being spent on the mega-sporting events of the World Cup and Olympics as triggers for these mobilizations. While I think these interpretations are basically correct, I want to focus in what follows less on what prompted the mobilizations, and more on what they may mean for the future. END_OF_DOCUMENT_TOKEN_TO_BE_REPLACED

The Role of the Arts in Political Protest

Understood in the broadest sense to include music and street theater as well as all forms of visual representation, artistic expression has an undisputed place in contemporary social activism. There is a long, perhaps even ancient history of wall writing and what we would today call street art and graffiti used as means to express discontent and catch public attention. Recall the humorous scene in Monty’ Python’s Life of Brian, where an occupying Roman soldier corrects the Latin grammar in a rebellious piece of street art. While this may be fanciful fiction, it reflects a reality in the current Palestinian conflict (think local activists as well as Banksy), as well as in our own Occupy movement. More stylized and professional art forms, and artists, have been involved in political protests and movements throughout the modern era and the linkages between aesthetics and politics, art and propaganda has been long debated. Can political art be good art, can good art be political? How effective is politicized art and the artists who make it? What exactly does art do in demonstrations of political protest? These are some of the issues I would like to address. END_OF_DOCUMENT_TOKEN_TO_BE_REPLACED

What’s the Difference Between Mainstream and Activist Journalists? From the IMC at the WTO to the PPL at the DNC 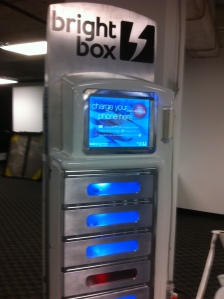 Countless news stories tout how the Internet has transformed this election, but how has political media coverage shifted in the digital age? To help understand this question, it’s useful to recall one of the birthplaces of political movements and Internet reporting.

When I was preparing to go to the recent Democratic National Convention (DNC) to research labor and activist groups, I was intrigued when a friend connected me to The PPL, a blogging space in Charlotte for non-credentialed journalists. It reminded me of the Independent Media Center (IMC) in Seattle during the protests against the World Trade Organization (WTO) in 1999. END_OF_DOCUMENT_TOKEN_TO_BE_REPLACED