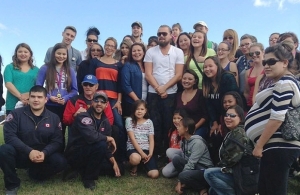 Proponents of the oilsands and the pipeline, including the Prime Minister’s office, have dismissed celebrity involvement in Alberta’s oil industry. According to Yahoo Canada News, the Prime Minister’s Office has commented in the past about “the energy-demanding lifestyle often afforded to such celebrities” and Tim Moen, leader of the Libertarian Party of Canada, referred to it as celebrity cheap talk demonizing Alberta’s oilsands. Moen told Yahoo Canada News that “The people I take seriously are people who actually create solutions. People that find ways to get cheap clean energy into the hands of people who want it.”  END_OF_DOCUMENT_TOKEN_TO_BE_REPLACED

Direct and Indirect Challenges to the Pipeline 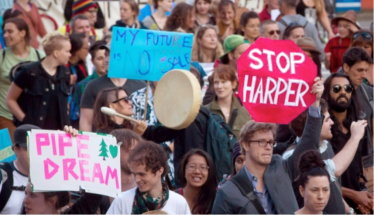 Over the course of the last two years, two pipeline projects – Northern Gateway and Keystone – have generated opposition from environmental groups in both the U.S. and Canada. As Rennie of the Canadian Press (June 17) notes, the pipelines have become highly political in both countries. In an article I wrote for Critical Mass, I mentioned that in the U.S., the Keystone pipeline project has posed a problem for President Obama and the Democrats given that environmentalists are against its construction while many others see it as creating jobs. There has been a tremendous push in Congress to get Obama to sign legislation that would allow for Keystone’s construction on the one hand, and Democrats hoping that Obama would veto such a bill on the other. Nonetheless, policy experts seem to believe that the Keystone project would inevitably move forward – if Canada is building a pipeline anyway, why shouldn’t Americans benefit from it? In fact, earlier polls did show that the American public thought energy security was a more important issue than greenhouse gases and a majority favored the pipeline’s construction (although the saliency of the issue among the public has likely varied greatly over the last year). END_OF_DOCUMENT_TOKEN_TO_BE_REPLACED

Idle No More: Allies of the environment

A year ago, I wrote a couple of posts about the growing tensions between environmental activists and the Conservative government in Canada, particularly with regards to the Gateway and Keystone oil pipelines.  The Conservative government portrayed environmental activists and organizations as radical and in many ways, depicted campaigns against the pipeline as coming from outside of Canada backed by foreign interests. But over the course of 2012, environmental issues became less salient with the public and garnered less attention from the media. Then, in a November 2012 Globe and Mail article, it was suggested that a recent Natural Resources Canada study finding that the chemical in the oil sands is not more corrosive than other oil,  is a “major strike against a key argument made by opponents of pipelines.” With a lack of interest, apparently damning evidence against environmental activists, and determination on the part of the government to continue resource development (including the oil sands project), things were not looking good for environmental activists. The Conservative government has continued to champion the pipeline and has called for more proposals for future natural resource development.

END_OF_DOCUMENT_TOKEN_TO_BE_REPLACED

Would you like an oil pipeline on your front lawn?

I just wanted to draw attention to the opposition First Nations in British Columbia are mounting against the Northern Gateway Pipeline.

This pipeline would transport oil from Alberta to the coast of British Columbia.

The Canadian government and associated corporate interests are pushing the pipeline because it will have “economic benefits”.

There is a huge problem with this.

It will run right through First Nation’s land.

Most of British Columbia is First Nation land.  No treaties have been signed.

The only way for the government to aquire rights to FN land is through treaties.  And under international law only sovereign nations can make treaties.

As a non-Native here are the two analogies I come up with for what is happening:

1. The U.S. puts a pipeline through Canadian territory without consent.  Canadians should accept this because there are “economic benefits.”

2.  A company puts a pipeline on a homeowner’s front lawn without consent. The homeowner should be grateful because there will be “economic benefits”.

The images for this post were taken by my colleague Charles Menzies who was at the recent Prince Rupert demonstration.