Online Surveillance as a Demobilizing Deterrent 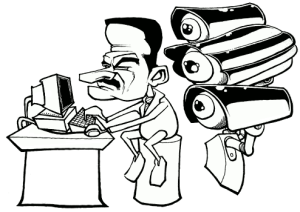 Mobilizing Ideas has published a number of posts on digitally enabled social activism, online censorship, the impact of online resources upon mobilization, and related issues (see here and here.) Gary King and his colleagues recently released an interesting paper that analyzes the Chinese government’s censorship of social media sites.  In a nut shell they scraped posts to over 1,300 social media sites in China and scraped them before human government censors were able to remove the posts. Rescraping the sites, they were able to determine what posts had been removed by the Chinese government.  They developed 85 topic areas, and thereby cataloged the states’ interests by comparing what was removed with what was allowed to remain posted across those issue areas.

Contrary to previous understandings, posts with negative, even vitriolic, criticism of the state, its leaders, and its policies are not more likely to be censored. END_OF_DOCUMENT_TOKEN_TO_BE_REPLACED