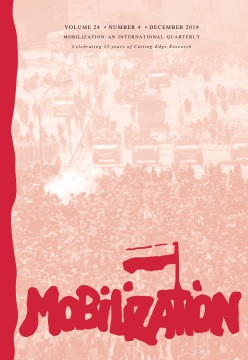 The field of social movement and protest research is today expansive and vibrant, with one of the largest  ASA research sections and several publication outlets for our work. I am honored that Mobilization has played a role in our field’s astounding growth. To celebrate next year’s volume 25 of Mobilization and the commencement of its silver-anniversary year of publication, here are some threads of the Moby’s backstory to illuminate how we arrived at where we are today.

I have a framed letter in my office from Herbert Johnson, who was then head of JAI Press, publisher of Research in Social Movements, Conflict, and Change. It says, “It is the opinion of our editorial board that the field of social movements is not large enough to produce a flow of manuscripts that would be necessary to support the journal on a consistent basis.”  The letter is dated August 10, 1993. Soon thereafter, I received notice from the ASA publication committee with similar bad news. That one hurt more, but, actually, the history of Mobilization starts with these rejections and the realization that if a journal of research in our field were going happen, it would have to done differently.

Thus duly warned, Mobilization was inaugurated in 1996 as a semiannual journal. At first, the work of reviewing, editing, layout and everything else was done on the Johnston’s dining room table. We cut and pasted—literally, not electronically—pages on large sheets of printers’ paper, which were converted for offset printing. We printed 1000 copies of the first issue  and sent them unsolicited and free of charge to members of the CBSM and labor movement sections of ASA, two social movements sections of APSA, and two ISA sections. In response, we received about 70 subscriptions, including a handful from libraries. I remember when the first library order arrived—from the University of Wisconsin, no doubt because my close friend and colleague, Pamela Oliver, recommended it there. NYU’s Bobst Library was the second—that would have been on Jeff Goodwin’s recommendation.

All this is to emphasize what a personal and networked enterprise Mobilization was in those early years. Personal in the sense that friends and colleagues were indispensable, not only for subscriptions but for submissions. Why publish in an outlet with such a limited distribution if not for collegial ties and commitment to grow the field? Networked in the sense that ours was then a relatively small field of research.  I heard doubts then whether Mobilization could stay afloat. It would not have without the indispensable support from the community of scholars in those early years.

I have always said academic journals need four things: good articles, close and attentive editing, a good editorial board, and library subscriptions. On the first dimension, Moby could not have survived those early years without the support of leading scholars who submitted their research. Those first issues had articles by Charles Tilly, Dave Snow, Sid Tarrow, Doug McAdam, Verta Taylor, Suzanne Staggenborg, John McCarthy, Anthony Oberschall, Ralph Turner, Manisha Desai, Helena Flam, Dieter Rucht, John Lofland, Mario Diani, Carol Mueller, Charlie Kurzman, Bert Klandermans, among many, many others.  Importantly, it had also the support of associate editors, Mario Diani and David Meyer. Mario was the European editor, with whom I often discussed how Mobilization could not survive without an international subscription base. Mario was at University of Strathclyde at that time and we endeavored use his extensive networks to bring British and European social movement scholars on board. I recent years, Marco Giugni and Maria Grasso have accomplished that through Moby’s European office. And early on, David Meyer was there to help with his enthusiasm, sharp intelligence, hard-work ethic, and kind words. He also started Moby’s book review section, which has been an enduring and important feature over the years, and today is edited by Liz Borland.

With this kind of support, it is fair to say that Mobilization built a reputation by the mid-2000s, not just as a specialty journal, but as a leading academic journal in the social sciences. Cutting-edge research by leading scholars, plus only two issues per year, plus the astounding expansion of our field of meant that, by the ten-year mark, our citation index was through roof and our reputation widespread and glowing. As one might imagine,  nowpublishers were interested, but our model of high-quality articles, low prices, and close and engaged editing was working well, so we didn’t bite. The bottom line is that, for the time being, we continue to be “published by and for scholars of social movements” as well as the “premier journal of social movement research.”Mobilization’ ssubscriptions continue to grow, which, along with strong citation stats, comprise the key measures of success. Notably, 2019 was the strongest year ever in terms of subscription growth. Also, the upcoming special issue on intersectionality and social movements recently had a record number of submissions.

Rory McVeigh took over from Dan Myers as executive editor in 2009, when Moby switched to quarterly distribution. Rory’s editing and administrative acumen, his good humor, and his impeccable scholarship and research skills solidified Mobilization’s  place as the field’s premier journal at a time when European megapublishers mobilized significant resources to enter the market. So Bravo! Rory and thank you for your hard work and keeping Moby strong.

And then there is current editor-in-chief, Neal Caren, who has been absolutely splendid at the helm. Neal has brought Moby into the twenty-first century, and, significantly, has nurtured ever-rising H-factors and citation indices since his tenure began, and, as I said, our growth this year was best ever. Rory went on to edit ASR, but I hope Neal stays around a bit longer before moving on to similarly bigger and better things—although I don’t think such things could possibly be betteranywhere else than they are here. Moby is a labor of love for us all, idiosyncratic in many ways but here to stay.

To close, Neal and I invite you to our conference in San Diego, June 12-13, 2020 to celebrate these 25 years. Moby conferences are ways to unite our research community in a small and collegial setting. Visit our website and register your abstract. The registration fee covers breakfasts, lunch, coffee, snacks, and reception:  https://MobilizationConference.sdsu.edu/

We hope you can come, and if you can—or you can’t—you still can support us in the most important way. Our model is predicated on an accessible, inexpensive, cutting-edge journal that is widely read by engaged scholars. So we conclude as we usually do, by giving our link and requesting support. Subscribe for our silver anniversary year of 2020. It takes three minutes to sign up. You can do so at: https://mobilization.sdsu.edu/subscribe.html