Wrecked: How the American Automobile Industry Destroyed Its Capacity to Compete — A Review 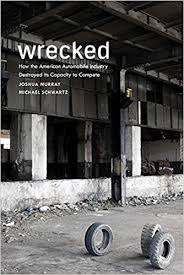 Wrecked tries to solve a puzzle. How did US Auto, once the largest, most prosperous industry in the richest, most powerful country in human history, fall to needing a 80.7 billion dollar bailout in 2008?

Unfolding the puzzle chapter by chapter, Murray and Schwartz’s book reads with the ease and grip of a very well written thriller. But it also opens the way for what I consider is one of the finest and closest analytical approximations to the dialectical ebb and flows that you will find mirrored only in our actual lived reality. The authors do not become stuck in instrumentalizing the role of economic structures. Nor do they, on the other end, fetishize cultural factors; staying removed of both economic and cultural determinism (both of which serve as popular explanations for the decline of US auto). Instead, they achieve a verisimilitude of the role of both structure and agency in our social world. Production structures (of the auto industry) limit and create possibilities for human agency (for both capitalists and workers), but human agency is often unpredictable. Human actions and decisions then determine how things play out. Wrecked beautifully walks us through this complex dialectical process.

The book begins with the common factual knowledge that Japanese automakers are more efficient than their American counterparts, mostly the result of constant product and process innovation. The Japanese have, what is described as, flexible production. Its features of just-in-time delivery, machine flexibility, geographic concentration and long term supplier networks, we discover, is what affords them this innovative capability. Not needing to worry about large stockpiles, having machines with the flexibility to produce many different products, having workers and suppliers in close proximity to constantly learn off one another and engaging with the same suppliers over years so as to build and work on trust and informal, personal communication channels — creates the best structure possible for change and innovation. Is this just a product of the Japanese work culture; different and distinct from an American one? The authors definitive answer is, no.

In chapter two, we are taken back to the early 1900s where, by circumstantial chance, Ford, one of the Big Three automakers (the other two being General Motors and Chrysler) becomes the first to organize itself around a system of flexible production; the Japanese only follow suit. It was mimetic isomorphism, in organizational parlance, and not the inbuilt efficiency of Japanese culture that determined its use of flexible production. Culture developed from material reality of the structure. Not fully conscious that that flexibility lent innovative ability and profitability, however (and instead falsely attributing profits to concentrated transportation efficiency), Ford goes through cycles of centralization followed by decentralization (dispersing production). By the mid-1920s the effects of dispersion begin to catch up. Innovation stagnates, and Ford suddenly falls behind its competitor GM, pushing it once more (and more consciously) towards flexible production. Dispersed assembling worked only with the assumption of product standardization, and GM was innovating rather than standardizing, using flexible production. Innovation became (and for the Japanese remained) a way to earn market share. By 1915, in Detroit, a more feral system stabilized with the same impact as the formal Japanese system of flexibility. In both, trust and informal relationships through flexible production became important for innovation, and profits.

Crucially, workers and their commitment played a decisive role in the smooth operation of flexible production. Much of the innovation rested on ground-up trial and error, for workers to detect and report error, find solutions with designers and engineers, and eventually implement an idea fully.

In a fascinating example, Murray and Schwartz discuss the introduction of a new rustproofing machine in the early 1930s in the Ford Flat Rock plant. It was developed by an outside supplier and bought in-house for standard testing by production workers. A major flaw was found — the deterioration of the steel surface by acid action before the deposition of the rust-proofing agent. Workers, using their years of know-how, applied a coat of low-grade gasoline on the affected surfaces. A counter-intuitive solution that removed the problem! Incidents like these demonstrate the importance of workers to the processes of innovation and profit generation within flexible production. This same structure, where workers were crucial to production also thereby afforded them leverage— structural leverage— where workers could refuse to play their role thus endangering the entire structure from functioning.

It is by deeply analyzing this structure that the authors manage to unpack human agency. What choices did the workers have and make? What decisions did the capitalists take? Is it finally the greedy unions and workers that led to the downfall of American auto manufacturing, as is commonly believed, or did the management exercise agency that eventually led to its own downfall?

Chapter three – “Class Conflict and the Impetus to Abandon Flexible Production” – addresses these questions and is explosive. Murray and Schwartz, brilliantly and with clarity, walk us through what should be some of the basics of economic sociology familiar to every social movement activist and scholar: how worker effort comes to be evaluated, how and by what processes is surplus value appropriated, under what conditions do workers protest, what explains worker appeasement, quiescence and deactivation of leverage, where can workers find pressure points, how many workers become necessary for collective action under different conditions of leverage, how are tactics developed in a workplace, and what informs managerial actions of autonomy, rules and profit-sharing in the work process?

These questions are part and parcel of class war and settled within that realm. At one end lies flexible production, innovation, worker leverage and the eventual possibility of worker demands for and in sharing power and company profit. At the other, managerial autonomy and power over workers through the abandonment of flexible production (finding ways other than innovation to reduce costs, such as a further labour squeeze), and the eventual possibility of losing competitive advantage, and as we can now confirm, becoming wrecked.

The chapter traces the oppressive working conditions of labor in the manufacturing plants and establishes how, in its early years, effort bargaining on the part of auto management became crucial in ensuring that workers’ structural leverage lay dormant. The Big Three needed workers to keep up the pace of work, lower absenteeism, contribute ideas, learn new skills and work under management by stress; all while remaining quiescent. To ensure this and make the oppression palatable, they had to give workers enough benefits and job security, solidify their belief that workers exploitation was a part of the pact of shared suffering and shared reward between the company and worker. In establishing how this precarious and fragile balance between the workers and management came to be maintained, the authors make the most potent use of E.P Thomson’s moral economy that I have seen to date. This deserves elaboration and a way into our classrooms.

With moral economy, the authors bring into the analysis deliberations that most social movement actors have, but that are often not articulated in movement literature: is this fair, is this moral, is this justified? For workers to commit themselves fully to the highly oppressive work in the auto plants without resistance, they had to trust the management’s promise that their suffering was not in vain, but would be compensated with shared rewards. In reality, this was never completely true, as Murray and Schwartz find, but something that worked like an ideology, making oppressive and exploitative work seem natural and moral. Worker resistance remained inactivated until such time that the moral economy operated, no matter how terrible the work conditions. But once violated, when the management breaks workers trust – as the Big Three did after depression when their profits went up and  they continued  to introduce innovation requiring immense worker effort, only to further enrich themselves while denying workers their share of the profit, in violation of the pact and further immiserating them— workers feel justified in the moral economy their actions enunciate.

Under these circumstances—worker agency combined with a flexible production structure (that created specific leverage points)—led to the successful Flint strike in 1936, despite low union presence. The authors spend time working through the organizational structure of the worker unions and collective action. They find the same structures of flexible production that gave workers structural leverage to disrupt production, also made radical democracy and the use and diffusion of the tactic of sit-down strikes conceivable.

The Big Three capitulated to most demands of the union, but unlike pre-depression, the strikes kept coming (in comparison to the Japanese auto, who after the 1950-54 union strikes in Toyota, managed to maintain worker acquiescence and innovation). In the last two chapters, the authors compare the differences in the circumstances before and after depression, between worker structural inactivation and activation of leverage, and moral economy operating under the two conditions. The Big Three had several options to settle the situation, continuing to innovate and stay profitable. Instead, they chose to abandon flexible production with the sole purpose of weakening labor power. They dispersed production to regions with low labor costs, ultimately relying on this cost-cutting as a way to compete— creating path dependencies— that couldn’t be reversed. The American auto industry came crashing down and burning in the process.

Just like for any good thriller, I will leave out the spoilers and let you read the book and discover all the calculations and factors that informed the actions of the management of Ford, GM and Chrysler. But, I will say this: Wrecked resurrects terms and ideas that ought to become standard in all social movement literature—leverage, class struggle, structural power, and capitalism. A combination of these concepts can lead us to understand a lot more than just the auto industry in Detroit. This book has given me insights into understanding my own work on the resilience of struggle among armed rebels in India, for making sense of how we ended up with the many environmentally disastrous and inefficient products we see today, why green capitalism cannot hold water, about the future of labor struggle in manufacturing, and of the manufacturing industry itself, and for when and where the possibilities of organizing and making social change exist.

Wrecked leaves you, surprisingly, with hope.

One response to “Wrecked: How the American Automobile Industry Destroyed Its Capacity to Compete — A Review”