Socio-political Dynamics within the Crisis of the Left: A Review

Socio-Political Dynamics within the Crisis of the Left. Edited by Juan Pablo Ferrero, Ana Natalucci, and Luciana Tatagiba 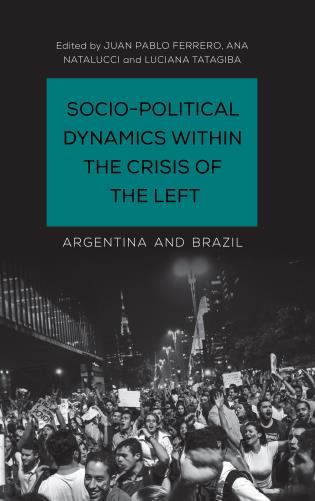 Over the past few years, political developments in South America have signaled the emergence of a new right-wing regional bloc of governments. There is a lot of good research on the role played by grassroots organizations in the “pink tide” of progressive administrations in the first decade and a half of the century. However, not much has been written about how mobilization processes contributed to the end of this wave. The edited volume by Ferrero, Natalucci and Tatagiba contributes to filling in this gap, and thus should be on the reading list of anyone interested in the region.

The different chapters make three crucial contributions. First, they discuss the causes of recent changes in South America’s politics. Is the “pink tide” definitively over? Are conservative governments here to stay, at least in the near future? In addition, by exploring the ways in which right-wing organizers took to the streets to protest the administrations of Rousseff in Brazil and Kirchner in Argentina, the authors address a central question: did these activists learn the lesson from their adversaries that disruptive collective action can achieve political results? Has the right embraced repertoires such as occupations, marches and roadblocks, or is this situation a historical anomaly?

Second, the book informs debates on the prospects for democracy in South America. Since the transition from authoritarian regimes in the 1980s, popular mobilization has been a key factor behind the consolidation of the rule of law and the recognition of new rights. The book forces us to consider whether we have reached a point in which grassroots organizing and street protests are effectively used to demand the imposition of austerity policies. The implications of such a development are far-reaching.

Finally, the different authors explore instances of collective action that have had a significant influence on the public agenda in recent years. Chapters about youth and feminist mobilization are a very welcome addition. Are events such as the #niunamenos protests in Argentina new forms of contention? Or are they the continuation of a long tradition of mobilization on neglected issues?

In sum, this edited volume promotes all sorts of relevant discussions about social movements and democratic governance in Argentina and Brazil. It provides new data on protests and offers innovative takes on important questions. For those of us who follow the events in South America, it should be part of our summer reading list.