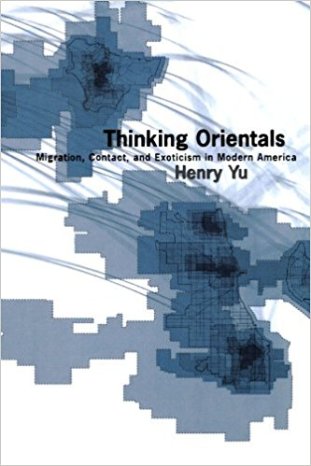 One of the joys of specializing in social movements is that so many of my colleagues are personally invested in activism on a grounded level. Most of us study movements because we care about social justice and want to understand how change happens or doesn’t happen. There are positives and negatives to this. We have a passion for rigorous research, but this passion can bias our work. Also, feeling detached and isolated within the “ivory tower” can create an academic existential crisis, especially for scholars who want to somehow benefit the movements they study.  For these reasons, I chose to review Thinking Orientals: Migration, Contact, and Exoticism in Modern America, by Henry Yu (2001). It’s a theoretically driven historical account of Asian American studies in the Chicago School’s Sociology Department. Although it’s not directly related to social movements, it is entirely relevant to the pros and cons of being scholars who are personally invested in the subject(s) of our research.

Henry Yu anchors his research in a historical understanding of how race is socially constructed. In Thinking Orientals, he focuses on sociologists at the University of Chicago and a research program spearheaded by Robert Park, a prolific scholar who studied Chinese and Japanese immigration and incorporation into American society in the early 20th century. As Yu describes, Park’s analytical lens–defining the immigrant experiences of Asian Americans as “The Oriental Problem”– reinforced exoticism and alienation of Asian Americans.  The expansive body of work that emerged from the Chicago school took the experiences of Americans of Chinese and Japanese dissent and framed those experiences as contrary to American culture, which produced both an internalized and societal culture of American Orientalism, which continues to influence how we understand race and culture.

In social movements theorizing, we experienced a similar problem that informed how we understood protest and contentious collective action, which brings me to why Yu’s book is particularly relevant to us. Robert Park also spearheaded a string of research that placed collective action and rational behavior on two opposing poles (Park 1972). Massive protests were studied as forms of mob mentality, detached from the ways that disruptive protests are tools for those without political and social power.

The construction of the subject of study was the problem in both immigration research on Asian Americans and in social movements research. In movements literature, the subject of study was constructed to be an irrational participant responding to periods of social disorder, engaging in mob behavior and groupthink. Park approached problems with integrating Chinese and Japanese immigrants as “The Oriental Problem,” where immigrants were the problem, instead of the racial hierarchy and political context as the problems. Park approached collective action as “The Protest Problem,” where the protest was a problem, instead of looking at that political context and grievances as problems. The literature eventually advanced beyond this lens primarily through the development of two theoretical camps: resource mobilization and political opportunity (for a detailed review of this progression, see Buechler 2004). But there are two lingering problems related to the nature of academic discourse and qualitative research that I’d like to quickly highlight, using Thinking Orientals.

First, Yu discusses interview data that Park and his mentees used.  Some of these scholars were of Chinese American and Japanese American immigrant communities and had a personal investment in understanding immigration and incorporation processes, which speaks to social movement scholars who are also invested in their informants and activism. He describes how interview data “had to be translated from everyday knowledge into a form and language that were prized by academics…by making this translation into the theories of sociology, an ethnic scholar often converted the knowledge into an esoteric and unknown language, unintelligible to the people who practiced it every day.” (Yu 2001:166)

For those of use who want our work to be useful to activists, this is a useful word of caution.

Second, for those of us who use interviews and surveys in our research, the following harkens back to some important touchstones in qualitative analysis. Yu describes one interviewee who had bits and pieces of his life story used “to produce general categories of analysis…it could be argued that the life histories varied wildly and the only reason they resembled each other at all was because they were produced in response to the same set of questionnaires.” (Yu 2001: 101)

Let’s think about our research on tactical decision-making and how our choice of questions steer this literature. Scholars often ask why some activists chose to protest, while others didn’t, and examine the use of extra-institutional tactics. But scholars could also ask why they chose to collect signatures, write letters, or run for local political office. Some activists and organizers use insider and outsider tactics, and when we frame a movement as only grassroots tactics, we’re missing part of the story. We’re just recently addressing insiders as a part of a social movement processes and the ways activism and the state are often entangled.

Yu argues that “(t)he Chicago sociologists’ affixing of identity to symbols such as race, culture, and place of origin created the modern map of American social thought.” (184) It is powerful to think what we do as academics may have an impact on any map of social thought. Thinking Orientals was pivotal in my decision to get a doctorate, and it continues to remind me that we must remain self-reflexive and interrogate the ways our unconscious biases could influence how we study the social movements in which we’re personally invested. What happens in the ivory tower isn’t always contained by it, for better and worse.

Buechler, Steven M. 2004. “The Strange Career of Strain and Breakdown Theories.” in The Blackwell Companion to Social Movements, edited by D. A. Snow, S. A. Soule and H. Kriesi: Blackwell Publishing.

Park, Robert E. 1972. The Crowd and the Public, and Other Essays. Chicago: University of Chicago Press.