The Fast and The Furious: protest impact

Are protests effective? This straightforward question interests both scholars and lay observers of protest. Whereas scholars most frequently answer the question with a nuanced ‘it depends’ and start narrating about contingencies; citizens and especially journalists most often simply want to hear impressive stories. Not the historical cases everybody is familiar with, but preferably more recent ones. Tales of contemporary struggles that truly show the potency of protest.

In the last few months, several examples of protest and success covered in international media caught my attention. These protests were noteworthy because, contrary to what much scholarly work suggests—that is, that protest is especially effective in the long run—these actions succeeded extremely quickly, in a matter of days. Their success seemed to be as sudden as their emergence.

In the next few lines, I will elaborate briefly on three such cases in Poland, Turkey, and Romania. I do not offer in depth, systematic analyses of differences and similarities between these events. Rather, I present small-scale descriptions of how protest might have been one of the elements in driving the victory home.

In Catholic Poland, known for one of the strictest abortion laws in Europe, an anti-abortion citizens’ initiative gathered more than 450,000 signatures, bringing a total abortion ban before parliament in early October 2016. MPs of the ruling Law and Justice party (PiS) voted unanimously in favor of passing the draft to the next stage of the policy making process: scrutiny by a parliamentary committee.

On Monday October 3rd,  however, “Black protests” disrupted the country. In many different cities, women dressed in black boycotted work or classes and marched the streets. A banner read: “Girls just want to have fun-damental rights”. Sympathizing businesses closed for the day. In Częstochowa, perhaps the most Catholic city of the nation, the city hall reported that 60% of the female workers had not turned up to work. By Wednesday, the parliamentary committee, impressed by the protests, advised MPs to vote the proposal down. The protests, as one minister said “caused us to think and taught us humility”.

In November 2016, a bill proposal on amnesty for men convicted of child sex assault triggered a wave of protest in Turkey. In Turkey, although illegal, child marriage is a widespread custom. According to the government, many men who are not rapists nor sexual aggressors, serve jail sentences as a result.  The bill, initiated on November 18th, proposed that men’s conviction would be overturned if they married their victim. According to the government, this bill would end unjust imprisonment.

The government’s frame, however, did not quite resonate. Opposition parties and protesters considered the bill as a free walk for child rapists, carrying slogans as “rape cannot be pardoned” and “rape cannot be legitimized”. Moreover, protesters argued that the bill would further encourage child marriage rather than preventing it. 3,000 protesters gathered in Istanbul and 600,000 signatures were collected in an online petition, raising awareness and support from different international organizations (like Amnesty International and the United Nations). A women’s rights organization, chaired by President Erdoğan’s daughter, opposed the proposal as well. As a result, on November 22, the bill was withdrawn and government declared not to initiate a new proposal on the matter. 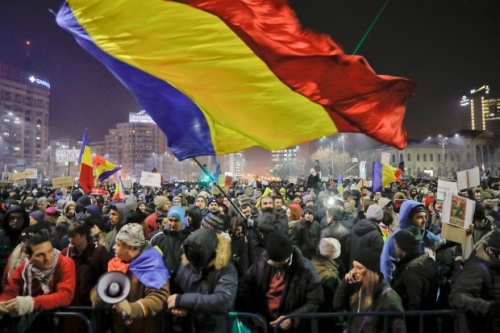 In the first week of February 2017, furious Romanians took to the streets, culminating on Sunday February 5th with up to 500,000 Romanians protesting nationwide; 200,000 of which in the capital, in front of the prime minister’s office. These were the largest protests in Romania since the fall of the communist regime. Impressed by the protests, several actors who initially supported the government, reversed their position.

On Friday February 3rd, the minister of Justice and architect of the decree—Florin Iordache—still stood by the law, but on Saturday prime minister Sorin Grindeanu announced that the cabinet meeting on Sunday would repeal the decree. In a television speech, he announced: “I don’t want to divide Romania … it can’t be divided in two. Romania in this moment seems broken in two.” A week later Iordache resigned. Protest continued, but numbers dwindled.

These three stories show how protest can win bystander support and pressure governments to react. Of course, these protest successes are only small-scale victories in larger battles—the problems surrounding abortion, child marriage, and corruption are far from alleviated in these three countries. These victories nevertheless are of critical importance. They show activists that winning concessions is feasible, that divisions between elites can be created, that bystanders can be activated, and that protest can be instrumental in achieving all of this. As such, these small victories provide movements with oxygen and inspiration, arming them with courage for the struggles to come. Perhaps protest can be effective after all.

One response to “The Fast and The Furious: protest impact”