A Review of Deana A. Rohlinger’s, Abortion Politics, Mass Media, and Social Movements in America.

Abortion Politics, Mass Media, and Social Movements in America (2015) is Deana A. Rohlinger’s tour de force thus far. The book coalesces her years of research on the abortion debate, social movement organizations, and media discourse in a way that is satisfying and compelling. I was pleased to see so many of the concepts she’s used over the last 10+ years (radical flank, organizational identity vs. reputation, professionalization, branding, etc.) deployed in this book. Finally, we are able to see her extensive data (that includes content analyses of thousands of newspaper, radio, magazine, and television accounts, as well as organizational newsletters, and in-depth interviews with members of the four organizations) used in a comprehensive analysis of a movement in which Rohlinger spent well over a decade of her research career immersed. 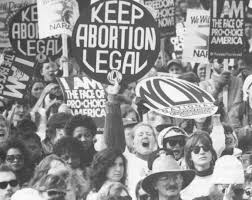 As she highlights in the introductory chapter, Rohlinger shifts the conceptual gaze away from examining the power of media outlets to select social movement events and issues for coverage and towards how activists strategize their interactions with mass media. For those of us knee-deep in research that assumes media power, it is refreshing to rethink these interactions as truly interactive, where activists use media as much as media use them. She crafted the entire book to emphasize activists’ and organizations’ ability to partly control and build a media repertoire. By repertoire I mean the very rich set of potential interactions organizations can choose to instigate or sustain with media outlets, including external media (mainstream outlets) and direct media (media organizations control, such as a website or social media profiles).

At the same time Rohlinger also highlights the varying constraints/opportunities that organizations negotiate as they strategize their media interactions, including institutional considerations like organizational allies, opponents, and political elites. In the second chapter she presents a very convincing argument that organizational reputation is integral to movement-media relations. I appreciate when scholars use classic work to couch their analyses, and she does so with Bourdieu and new institutionalism. She offers a more nuanced way to conceptualize the mass media field that builds on Fligstein and McAdam’s recent work (2012), where although the field in which an organization functions affects its strategic choices, it is a social constructed and therefore morphing realm. In the rest of the book she uses empirical analyses of the National Right to Life Committee, Planned Parenthood Federation of American, the National Organization for Women, and Concerned Women for American to demonstrate these constantly changing contexts that organizations negotiate. Throughout the book she offers useful diagrams and models of how she conceptualizes the complicated interactions involved in abortion politics and mass media, which are helpful to keep the reader grounded in this rich analysis.

Rohlinger’s data is extensive, and reflects over ten years of her hard work and diligence examining and writing about abortion politics. She focuses the movement analysis on four organizations: the National Right to Life Committee, Planned Parenthood Federation of American, the National Organization for Women, and Concerned Women for America. Her examination of each organization is in-depth and offers a set of identities and reputations that can be easily compared to other movements. Each of the four organizations is given an entire chapter for the analysis, and the analysis is set within the particular political context within which each organization functioned. She is careful to highlight throughout the book how her use of the strategic choice approach takes into account that social movement strategies are “shaped by the broader political environment and other actors operating in it.” (p. 13) Not only does she take the political environment into consideration, she also considers the organizational, movement, and institutional context within which social movement organizations function.

Rohlinger is careful to not conflate how these organizations can strategize media relations differently from they strategize political relations. This careful parsing apart of different institutional considerations reminds me of Halfmann’s recent book, Doctors and Demonstrators. Both Rohlinger and Halfmann take great care in deliberating on how activists both function within and influence particular institutional fields.

Rohlinger includes rich discussions of the radical fringe and direct action groups such as Operation Rescue. She analyzes how NRLC negotiated media attention in relation to the inflammatory statements and actions of radical fringe groups, where silence was an important tactic in media strategies. This is important for scholars who also do not see organizations as functioning autonomously in the social movement ether, but as part of multiple fields of interconnected actors that must consider these relationships as part of their strategy.

I am curious how her use of strategic choice could be used to examine movements that do not use formal organizational structures. I am, of course, thinking of Occupy Wall Street. But some movements include campaigns or groups that are loosely structured, such as clandestine groups like the Animal Liberation Front or Anonymous. These groups are extremely media-centered and also make strategic choices in their interactions with media outlets. Rohlinger’s book could spark more work on how organizations with informal, but intentional, infrastuctures may interact with mass media differently than the types of formally structured organizations highlighted in this book.

Rohlinger includes a very brief mention of another animal rights organization, People for the Ethical Treatment Animals (PETA) in relationship to organizational identity. She very helpfully distinguishes between organizational identity, reputation, and branding. These three organizational characteristics influence how they interact with mass media. Identity involves the most choice in terms of how an organization structures itself and presents itself to the public. Reputation and branding are not as controlled, which made me wonder if more work needs to be done to interrogate the difference between the processes through which brands and reputations are established in the mass media field.

Overall, this is an extremely rich and methodical presentation of movement-media dynamics. This is the kind of work I wish was available during my activist years working with non-profits and smaller groups that spent so much effort trying to get media attention. My first article that looked at media and movements was motivated by a particular set of memories from these years and my time as an animal rights activist. I remember after protests my friends would keep track of the outlets that showed up with cameras. Afterwards each of us would agree to watch that newscast that night and record it on our VCR. (This was, obviously, before internet.) I remember watching newscasts and when footage from a lab or factory farm got on air I would frantically call people and say things like, “Five seconds of lab footage got in!”

These memories are vivid for me, and I think the activists I know who still work in the field would benefit from books like this, where their efforts and concerns are put at the center of the analysis.

One response to “A Review of Deana A. Rohlinger’s, Abortion Politics, Mass Media, and Social Movements in America.”