What is Happening in Turkey: New Episodes of Contention

After two weeks of contentious politics, streets have started to return to normal in Turkey. Although the activists did not leave Gezi Park yet, current political atmosphere has already changed: massive confrontational rallies now harbor traditional battle-grounds instead of the sentiments that gave rise to the Occupy Gezi. The Occupy Gezi was an expression of a mass frustration by a wide-range coalition against aggressive neo-liberal regime that has been symbolized in urban renewal projects and PM Erdogan’s iron fist. The current organized rallies in the last two days, however, push people to be polarized as pro-AKP or anti-AKP. This is the new phase in contentious episodes, and arguably, a detrimental blow to the spirit of the Occupy Gezi. 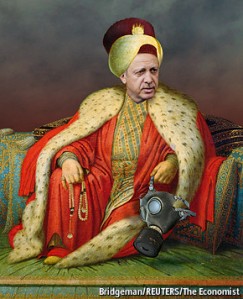 Western media was too hasty in describing the protests as a “secular awakening” and a crisis of democracy in Turkey. Although late episodes of contention makes the traditional battlegrounds solidified, the initial spirit of the Occupy Gezi was unprecedented. Perhaps for the first time in modern Turkey, we have witnessed a type of New Social movement protests, typically occurring in post-industrial societies. No, it’s not Marx that grasps the spirit of the Occupy Gezi, it’s Melucci. Key words to understand these protests are dignity, self-realization, respect, resistance, and identity politics. All these demands find their symbolism in youth culture, according to Melucci. In fact, Occupy Gezi was largely organized by college students, who were considered to be apolitical (and who remember only Erdogan as their leader). The spokesperson of CARSI, a famous soccer-fan group that leads the mass protests, expressed the aforementioned feelings of youth resistance: “Life means resisting to power-holders!” (“Yasamak Muktedire Karsi Direnmektir!”) (See a recent scholarly article on Carsi) As social movement scholars well know, “relative deprivation” is a key process not only for mass uprisings after economic downturns but also mobilization of educated middle-class youngsters in post-industrial cities (For a shrewd analysis, see Cagaptay’s OP-ED in NY Times).

A few days ago, a prominent social movement scholar asked me what is happening in the country and I had a long e-mail to her. Writing an e-mail from the field is quite different from writing an OP-ED piece from your desk, of course. Yet, despite its crude nature, the content of the email is shared below:

No one could imagine such a mass protest indeed! As you may know, the protests were initiated by some environmental activists for good reasons and later it turned out to be  anti-government protests in many cities (at city centers). The episode unexpectedly developed as the Prime Minister Erdogan did not listen to voices of the environmental activists. Those who are angry with Erdogan (for a variety of reasons) joined them and the police brutality worsened the situation. Erdogan’s self-defending statements further made the masses more furious.
As you know, Erdogan’s party AKP was formed after the split in the pro-Islamic National Outlook movement. As the liberal wing of the National Outlook, Erdogan’s AKP was representing liberalism, change, and Islamic culture by pursuing European Union reforms in the country. They came to power in 2002 and their management of the economy as well as open-minded/reformist attitudes truly impressed a majority of the people in the country, including some ethnic minorities like Kurds and religious minorities like Armenians. The elections in 2007 and 2011 only made the AKP more strong. (AKP won the  2011 general election by almost 50 percent of all votes in Turkey) The Turkish army, which had developed a habit to intervene in politics in the name of secularism/laicite) is not seen as a threat to democracy anymore. And yet… After the 2011 elections, in his third term, Erdogan did not do what he promised, a new Constitution, which would make all these changes in the past decade most meaningful. The current constitution was written by the Army in 1982 and almost all political groups (from right to left) still hate the Constitution. For two years, Erdogan and his party AKP does not represent change and reforms. In his third time in office, Erdogan now listens to no one. The primary reason is that there is no party that could ever compete with AKP in Turkey. Consider the 3 other parties in the Assembly: CHP, which is seen as Ataturk’s party, still represent secularist/nationalist elite in Turkey. Although CHP is calling itself as a leftist party, Kurds and many other minorities would call them “racists.” CHP would never become a people’s party unless it dramatically changes its discourse. The other two parties in the Assembly are MHP, seen as strongly right-wing Turkish nationalists, and BDP, a pro-Kurdish party that explicitly supports the PKK, Kurdish guerrilla in the mountains.
People are really getting angry with Erdogan and, unfortunately, do not see an alternative. So, mass protests began as an expression of frustration, supported by many different groups from radical left to liberal Islamic movements, including some Gulen movement activists (which is very surprising!). As days passed though, the CHP and some marginal leftists groups “hijacked” people’s protests by waging violence (not only physical but also symbolic violence such as Ataturk flags). So, now, many initial groups who were on the streets are going back home and some marginal political groups try to benefit from the atmosphere. Compared to the Arab Spring, however, Turkey is quite different. As far as I see, the country’s economy is still shining and people would never want to get into a chaotic situation.
I expect two things as a result: First, Erdogan had been hopeful to change the current system (with people’s support, of course) into a Presidential system like USA, and of course, counting that he would become a President. Now, many analysts see this scenario as impossible. A second point is that elections are approaching in Turkey, and there are plenty of people who are frustrated with the AKP but think that other parties are horrible. So, most probably new parties (in center-right and center-left) would emerge in Turkish politics to fill the vacuum.

This e-mail exchange happened a few days ago. Now, we witness a new phase in contentious politics. On Sunday, massive crowds were storming through Taksim Square (largest ever in two weeks), while—on the other side—thousands were clapping in pro-Erdogan rallies in many cities. Yes, this is the new stage in the Episode: Now, the masses have swiftly got into an atmosphere of a hot election, which is only seven months away. Polarization in the country has always benefited Erdogan so far. His staunch stance against the Turkish military made him a hero in the eyes of millions. Yet, the situation is quite different this time. I totally agree with Omid Safi (see his full article):

Erdoğan’s greatest asset is also his liability at this moment.  He is a proud man, a strong leader, and a visionary who has been able to lead Turkey to becoming a regional leader and a genuine model that other Muslim majority societies look up to as a vibrant economical, political, and civilizational model.   At this moment, his proud nature, even bombastic nature, is also serving as a handicap.  Turks (and Muslims worldwide) admired Erdoğan for his confrontation with the Israeli president Shimon Peres in Davos, immortalized in the “One Minute” moment.  But now is not the time for a “one minute” walk out. It is time for healing, for listening, for apologizing for heavy-handedness, and for bringing together.     Erdoğan has been among the most powerful Turkish politicians of the Republican period.   He should be wise enough to realize that he is not facing an Israeli adversary.  He is facing his own people.  He is facing a substantial percentage of his own society who right now do not feel represented, included, seen, heard, and accounted for.

4 responses to “What is Happening in Turkey: New Episodes of Contention”