Arts of the Political: New Openings for the Left 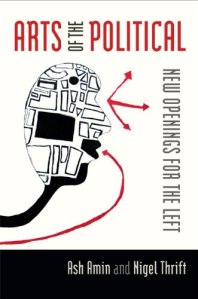 Arts of the Political: New Openings for the Left, by Ash Amin and Nigel Thrift, isn’t exactly beach reading, but to those interested in a novel effort to link a wide range of political theory to practical politics, it is an interesting and (surprisingly—given the theoretical range it covers) engaging read. With apologies to Claude Levi-Strauss, this is the sort of book that is “good to think with,” especially for readers willing to use its engagement with political thought as a jumping off point for further reading or as a way to understand their own activism in  a new way. That said, while this is a book about social movements, those looking for a direct engagement with what I would consider to be the main currents in social movement theory  (both contemporary and historical) will be disappointed.

Amin and Thrift, at least in the United States, are probably best known to those working in what could loosely be considered “critical” urban geography. They previously collaborated on the 2002 book Cities: Reimagining the Urban. While Arts of the Political has some similar points of reference to that earlier work, it is both a more ambitious and more modest book. Cities was an attempt to push urban studies into several new theoretical directions, and as such made for a somewhat disjointed read (to my mind, at least). Arts of the Political is a more tightly organized work, even as the authors’ terrain is much more broad.

Arts of the Political is not intended as an “academic” treatment of social movements or the “Left” as such, nor does it propose any sort of systematic program. Amin and Thrift grant a commonality to various strands of the Left, which they see as linked by a common concern with inequality, oppression, and exploitation and an effort to create a fairer society. However, they avoid proposing a set programme or set of definitions explaining what should be included in Left politics. And actually this is sort of the point: the authors compare their effort to “the more human scale” of Jane Jacobs as opposed to the “grandiose” vision of Robert Moses (67), and more broadly argue that a focus on blueprints and set policy agendas have actually hindered the ability of Left political movements to gain traction.

As such, this is less a book about specific policies, parties, or movements than an effort to expand the Left’s definition of what counts as “political” in order to make it a more effective force. Amin and Thrift point to three “arts” that can help make this happen: invention, affect, and organization.  Without going into detail here, the reader can probably figure out what is meant by each term. A thumbnail sketch doesn’t really do them justice, but basically invention is a means of imagining new worlds, affect is the use of emotions and ties not traditionally incorporated into rational actor models, while organization is, well, organization.

The majority of the book, then, is explaining what these arts are, how past “Left” movements have used them successfully and how present-day movements could be invigorated by paying more attention to them. An early chapter discusses four Left movements of the past (German socialism, Swedish social democracy, the British Women’s movement, and the U.S. Progressive movement) as examples of movements that found political success through expanding what was considered “political.” A later chapter interrogates various strands of leftist thought, finding them lacking not for fragmentation but for a lack of inventiveness and affective power.

One of the elements I enjoyed most about Arts of the Political is how Amin and Thrift engage with a range of contemporary political theory in a way that makes it relatively accessible. Part of this is because, while the book has a point and a political goal, it really isn’t polemical. So when authors whose reputations precede them are brought into the narrative, they are engaged with pragmatically. To take one example, the relationship between political movements and non-human actors (whether animals, or plants, or objects), based on the work of Bruno Latour and others working in what has been described as “actor-network theory,” comes into clearer view when we think about how to understand the role of, say, climate change in how we understand and attempt to shape the world. Climate events such as Sandy are not “rational actors” but they still have an effect, after all.

If I had one central reservation about this book, it is that it delves very deeply into some literatures—especially political philosophy—but ignores others. While the goal of the book is to rethink social movements and mobilization, Amin and Thrift really don’t engage with or incorporate much social movement literature or research. This will undoubtedly give the reader familiar with, say, political process theory and political opportunity structures a sense that they are reading a book from an alternate universe. To take one example, the concept of “affect” (something Thrift has been thinking about for a number of years) has a number of commonalities with work on emotions in social movements (such as Passionate Politics, edited by Jeff Goodwin, James Jasper, and Francesca Polletta), but nowhere are these or other authors discussed or mentioned. Expecting a somewhat lean text (about 200 pages) to incorporate every potentially relevant text is somewhat unfair, but it remains a bit of a missed opportunity to link the discussion to more concrete examples and insights from social movement research over the years.

Finally, given that Amin and Thrift focus heavily on Europe—one chapter focuses on the Eurozone, for instance—it is not surprising that Occupy movements are only mentioned in passing (and actually somewhat dismissively). While the continuing political influence of Occupy remains an open question, issues raised in regards to Occupy actually tie in quite closely to the concerns addressed in this book, namely how a movement balances often competing issues of inclusion, organizational efficacy, and programmatic coherence. One criticism leveled against Occupy, after all, has been its lack of a coherent agenda. But to the extent that the various strands of Occupy, such as Occupy Sandy, can be considered to be expanding our notion of the “political” through invention, affect, and organization, then they are engaging with many of the same issues and concerns that drive the arguments found in this book. That said, one of the reasons why I think this book is worthwhile is that even when it fails to mention a particular author or movement, the reader is able to use it as a way to better understand their own engagement in the world.

4 responses to “Arts of the Political: New Openings for the Left”