Review: A Train in Winter 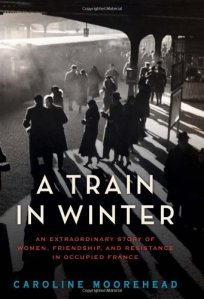 Caroline Moorhead. A Train in Winter: An Extraordinary Story of Women, Friendship, and Resistance in Occupied France (Harper/HarperCollins Publishers 2011)

During World War II, Marshal Pétain’s authoritarian Vichy regime guillotined women for abortion. It passed laws forbidding women from entering the civil service, encouraging women younger than 28 to quit their jobs upon marriage, and requiring women over 50 to retire. Pétain considered women responsible for remaking the state beginning with the family: what he called the “essential cell” of social order. Politically active women were considered a threat to the moral regeneration of France (Muel-Dreyfus 2001; Pollard 1998).

In October 1940, the French Vichy government entered into collaboration with Nazi Germany. Laws were promulgated to restrict the rights of Jews and foreigners, communists and other left-wing activists were declared enemies of the state, and French internment camps were transformed into labor and concentration camps for so-called “undesirables.” Many French openly welcomed collaboration and Pétain’s National Revolution, but there were always resisters. As France became increasingly authoritarian and anti-semitic, some French men and women mobilized to fight against the state.

A Train in Winter by Caroline Moorehead traces the story of Convoy 31000: 230 women who clandestinely fought the Vichy regime and Nazis in occupied France at a time when being a politically active female was criminal. Ranging in age from 17 to 67, the French women of Convoy 31000 were students, teachers, writers, scientists, housewives, and a singer at the Paris Opera. Some joined the resistance along with their fathers or husbands, others with mothers or sisters, many on their own. Several sent their children to stay with friends or relatives outside of cities where they lived, knowing well that fighting the Nazis placed them and their families at risk of forced labor and death. On February 15, 1941, 60 french police officers—members of the Brigades Spéciales—were dispatched by Commissioner Fernand David to arrest these female resisters. Captured and sent to camps de la mort lente—a nickname translating to “camps of slow death” given by the French to concentration camps in the Third Reich—the women suffered constant hunger and extreme cold, torture and the threat of executions. In January 1943, the women were transported to Auschwitz. By the time war ended two-and-a-half years later, only 49 had survived.

Moorehead’s book is inspiring and heartbreaking at once. Drawing on interviews with survivors and their families, as well as research in French, German, and Polish archives, Moorehead details these women’s lives and their extraordinary friendships. Together, they organized against Nazi brutalities with forms of resistance both small and large. Their friendships and increasing emotional attachment to each other provided a resource that enabled them to bear the brutalities of what they soon came to call l’enfer, hell.

At Auschwitz, the women’s hair and pubic hair were shaved. Their arms were tattooed. They were forced to participate in horrifying medical experiments. Moorehead’s focus on the French women of Convoy 31000 reveals the unique strength of women’s friendship in facilitating the kind of emotional resilience and social-organizational resources necessary to endure Auschwitz. After their hair was shaved, Josée Alonso turned to the other women and tried to make them laugh: “Look,” she said, “you will be able to look just as elegant as me.” More than once, if the women found out about special selections for gas chambers in advance, they would organize to hide the weaker among them. The women of Convoy 31000 knew they could not allow themselves to become victims of chance. Moorehead writes, “so cohesive had the women become, so attuned to each other’s frailties, so watchful and protective, that planning how to keep the group alive had become a way of life” (p. 215).

Research on high-risk activism reveals that even when political opportunities are limited or absent, individuals will sometimes mobilize to fight against oppressive regimes (Goldstone and Tilly 2001; Goodwin 2001). Furthermore, despite clear threats to lives and livelihoods, individuals are sometimes willing to risk torture and death for their activities (Einwohner 2003; Loveman 1998; McAdam 1986). Moorehead’s book recounts the ways in which French women combined forces to try and resist Nazi brutalities and ensure one another’s survival despite the high-risks that such activism entailed. For example, in their first few roll calls, the women of Convoy 31000 rapidly learned the dangers of standing alone: Léona Bouillard, 57, died during the second roll call; she slipped and fell to the ground. At roll call several days later, Yvonne Cavé died. Someone had stolen her shoes in the night, and her legs were black with frostbite. When Simone Sampaix began to lose feeling in her feet during a roll call two weeks since the women’s arrival, Madeleine Dissoubray told her, “move your feet inside your socks.” Having already lost several women to long hours of standing in the cold, the women crowded closely around Simone to try and provide some warmth. Simone’s feet froze anyway, but by the end of the day, she was still alive: at risk of death, Madeleine pulled Simone forward and and carried her when the roll call finally ended. Marie-Claude Vaillant-Couturier recalled that so many women died that day at Auschwitz, the camp looked like a battlefield. Had the French women of Convoy 31000 been caught in their mobilization to save Simone, they surely would have been killed, too. 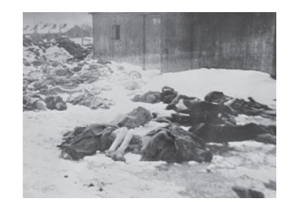 When sent to do forced labor, the French women sometimes sang the Marseillaise together, France’s national anthem, which was banned in Vichy France and the German Reich during World War II. During pauses in their work, older women educated younger girls about literature and politics. Women who felt strong on any given day saved rations of their bread for those who seemed weak. Moorehead’s book is captivating in how it details these acts of resistance, which went against the rules of Auschwitz and later, Ravensbrück, a women’s labor camp also in Poland to which the French women were sent in winter 1944. Among others, Moorehead cites Cécile Charua, who described the French women’s relationships as follows:

We didn’t stop to ask ourselves whom we liked and whom we didn’t. It wasn’t so much friendship as solidarity. We just made certain we didn’t leave anyone alone.

This solidarity was necessary for survival; by contrast, solitude meant death. Observing the horrors of Jewish women’s experiences in the camp, Marie-Elisa Nordmann, a French Jewish woman herself who hid her identity while confined as a political prisoner with the others at Auschwitz, realized just how lucky she and the other French women were to not be separated from one another. In many cases, Jewish prisoners at Auschwitz were not only divorced from friends and family who were often gassed upon arrival, they were also forced into barracks where they could not communicate easily with others because many spoke a different language. And yet, two-and-a-half months after arriving at Auschwitz, only 80 of the 230 French women remained alive. Resistance did not guarantee survival, but the overwhelming loss resolved more firmly their commitments to organize and try.

Once World War II ended, General Charles de Gaulle, leader of the Free French Forces and Prime Minister of the French Provisional Government, awarded 1,038 surviving members of the Resistance with the Ordre de la Libération—the second highest honor a person can receive in France. Only six women received this title, a testament to the idea of wartime resistance as a specifically male, specifically violent action. None of the women on Convoy 31000 received the distinction; without Moorehead’s work, their stories might have gone largely untold.

Goldstone, Jack A., and Charles Tilly. 2001. “Threat (And Opportunity): Popular Action and State Response in the Dynamics of Contentious Action.” Pp. 179–94 in Silence and Voice in the Study of Contentious Politics, edited by Ronald R. Aminzade et al. Cambridge: Cambridge University Press.

Muel-Dreyfus, Francine. 2001. Vichy and the Eternal Feminine: A Contribution to a Political Sociology of Gender. Kathleen A. Johnson (trans.). Durham and London: Duke University Press.

One response to “Review: A Train in Winter”