Will Québec Anglophones take to the streets?

Anglophone municipal leaders are worried that the Parti Québécois (PQ) government is destroying linguistic peace according to a March 12 Globe and Mail article by Rhéal Séguin.  Since the PQ formed the minority government late last summer, language has been back on the political agenda in a very contentious way. Québec has had its ethno-linguistic battles historically between the Francophone majority and the Anglophone minority (although the language debate has expanded to include other linguistic groups).  Through most of the last decade, the language issue seemed to have quieted down.  Scholars like Meadwell and Pinard have described the cyclical nature of mobilization, demobilization and remobilization of the nationalist movement (and by consequence, the ebb and flow in the salience of ethno-linguistic politics). There are numerous reasons given about the perennial revitalization of language politics: from labor market competition, to threats to the French language, to political pandering. Whatever the reason this time, it begs the question as to how Anglophones will respond; specifically if they are more likely to resort to disruptive collective action.

Why is this an interesting question? Or, put another way, what do we expect Anglophones to do? A while ago, I wrote a paper (now in Nations and Nationalism) on the ways in which ethno-nationalist policies change the incentive structures for ethno-linguistic groups.  Focusing on Québec between 1971 and 1981, I show that ethno-nationalist policies decreased the economic return particularly for well-educated, higher earning, professional Anglophones in Québec, while increasing the economic position of Francophones and in particular well-educated professionals. For this reason, many Anglophones saw outmigration as a less costly option than staying in the province.

Originally, this paper was meant to systematically test how Anglophones chose outmigration vis-à-vis voice (e.g., protest and other forms of collective action). I wanted to show the relationship between the costs of exiting Québec compared to the costs of staying and voicing discontent. However, in this period, there were so few attempts at collective action by Anglophones across the province that this proved to be impossible to test using statistical modeling. I, like many others, suggest in my paper that Anglophone voice was largely ineffective and thus, there was a perception among Anglophones that investing in mobilization would not yield any political change in their favor. In effect, this made exit all the more appealing.

So why might they now take to the streets? In reply to Kai Heidemann’s excellent essay, Fields of Minority Language Activism last summer, I suggested that an important language battleground would be local municipalities and that given the recent political turn in the province, Anglophones may find cause to protest. Municipal governments are not a new field of action. Municipalities had always been a place where the voice of the Anglophone community was still influential in contrast to the ineffectiveness of Anglophone voice at the provincial and federal levels. Not surprisingly perhaps, when in the 1990s, the PQ government mandated that municipalities merge, Anglophones complained that they would lose one of the only remaining meaningful outlets for expressing their grievances. 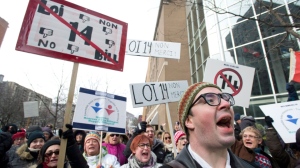 What has prompted, in part, recent Anglo angst is Bill 14, a proposed law that would strip away the bilingual status of municipalities whose Anglophone population has dropped below 50 percent. According to Séguin’s article, the mayor of a Montreal-area municipality, Côte-Saint-Luc, where the Anglophone population is still above 50 percent “spoke on behalf of several English-speaking communities when he argued that the bilingual status was a vested right that should only be removed if asked by a municipality.” In urging the PQ government to reconsider Bill 14, the mayor argued that Anglophones built his and other municipalities regardless of whether at present, Anglophone populations are below 50 percent. “I can tell you that if someone came to Côte-Saint-Luc to tell us we would lose our bilingual status, you will have chaos, you will have opposition of people you wouldn’t think of who will take to the streets and you will lose linguistic peace,” the mayor proclaimed. A protest against Bill 14 took place outside the Premier’s office in Montreal in mid-February. Is this a sign of things to come?

4 responses to “Will Québec Anglophones take to the streets?”