Why Occupy is not Decolonization

Two recent articles both of which are critical of the Occupy movement provide a compelling case for why non-Indigenous activists should take greater care in talking about Decolonization.

Among their many contributions, both articles deconstruct and critique the Occupy movement’s use of the following two images:

Tuck and Yang point out that Land is wealth. A shift in wealth from the 1% to the 99% is simply a redistribution of land that is already stolen. 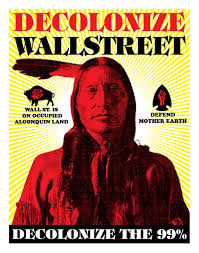 Barker notes a number of problems with this imagery including that Algonquin is a language not a people and that the “aesthetic is commonly appropriated by Settler people in constructing myths of pure, noble savages, implying an exile outside of contemporary events” (p 329: see also Adrienne, 2011 cited in Barker)