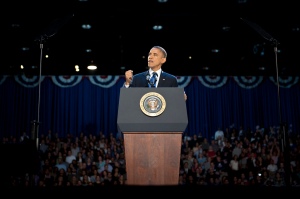 In 2008, the process that led to Barack Obama’s election was often described as more than a campaign. Many pundits saw it as a movement (here’s a good example) as did many of the folks who participated in it (and, apparently, as did their record labels; see the subtitle). Then what? As Marshall Ganz has argued, President Obama lost his “transformational” orientation–and demobilized much of the organizational structure that had built up the movement, got out the votes, and engaged a new set of political participants. The result was a series of bruising policy battles, midterm election losses for Democrats, and an enlivened conservative movement in place of what was supposed to be the continued flowering of new progressive policies carried through by a wave of continued grassroots organizing.

In 2012, Obama was back on the campaign trail, working once again to connect with and energize the grassroots. This time around, things felt a little more campaign-like (see the October “Ground Wars” Dialogue for some relevant thoughts) and bit less movement-like (I haven’t seen any 2012 commemorative albums hit the market yet–although Mariah Carey has apparently released a victory song). But the early signs seem to indicate that Obama is planning on taking a more grassroots—or at least more public—approach to the next round of policy challenges on the agenda. As the New York Times reports:

As he prepares to meet with Congressional leaders at the White House on Friday, aides say, Mr. Obama will not simply hunker down there for weeks of closed-door negotiations as he did in mid-2011, when partisan brinkmanship over raising the nation’s debt limit damaged the economy and his political standing. He will travel beyond the Beltway at times to rally public support for a deficit-cutting accord that mixes tax increases on the wealthy with spending cuts.

Admittedly, “travel[ling] beyond the Beltway” doesn’t exactly seem like the most ambitious movement organizing effort ever, but the article does repeatedly mention the lessons the administration claims to have learned from the first four years and their desire to hit the streets in the next four years. Will Obama eventually be remembered as a movement president? That remains to be seen, but at least for the moment, it’s still a possibility.

3 responses to “A Social Movement President?”