Summers in Montreal usually mean festivals; whether Just for Laughs or the Jazz Fest. But, with an impending election, Montrealers this summer are wondering whether student protests will influence the upcoming Québec provincial election. Protests were first activated by the threat of a tuition hike, but quickly became about something bigger (see my May 10th post). One development has been the so-called radicalization of the protests, particularly organizations like CLASSE, accused of undermining negotiations with the government and as being aligned with the current opposition party, the sovereigntist Parti Québécois. It became clear, fairly early on, that the greatest obstacle for student protesters was convincing Quebeckers that the protests were more than just about tuition, that they are symptomatic of a bigger socio-structural problem, and that disruption is necessary (see my May 25th post). Unfortunately for protesters, public opinion has not been on their side. 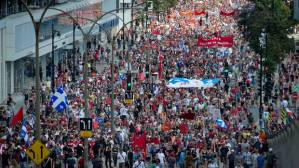 Why does public opinion matter for social movement mobilization? As Perreaux of the Globe and Mail writes (July 22, 2012), “Even as they banged drums and sang songs along downtown streets, students and their supporters were weighing options: Do they resume the intense protest tactics of the spring and risk pushing fence-sitting Quebeckers into voting for the incumbent premier, Jean Charest?” Student leaders worry that continued disruption will just push more Quebeckers on the side of the current Charest government in the upcoming election. Interestingly, leaders of the more militant group CLASSE have sought to assure the public that they are not affiliated with any one party. Gabriel Nadeau-Dubois, who represents CLASSE, told Perreaux, “’There’s that, and we also want to be independent of political parties. We won’t be following any party, we won’t be endorsing any party, we won’t be disrupting any Liberal events. We will do our own tour to make sure our views are known.’”

What all this suggests is that possibly, after the dust settled and protest activity simmered down for a while as campuses increasingly depopulated over the course of the summer, that student leaders are more conscious of the relationship between their goals and tactics, and public opinion. As I mentioned in my previous blog, the public in fact supports the tuition hikes (regardless of whether this is at the core of student mobilization or not) and that student leaders face a real possibility that continued disruption will simply help incumbent Jean Charest win the election.

Social movement scholars often control for “election year” in their models assuming that protest might matter more when there is a possibility for new elite alignments. More uncertainty around issues exist during elections and often, protest requires elites to not only pay particular attention to an issue and make that issue a more central feature of a political campaign, but also to take sides on that issue. However, public opinion scholars will remind us that public preferences are also an important factor in shaping political outcomes, and social movements must contend with voter attitudes in attempting to influence elections and policy. Protests in Québec highlight this tension between activists making grievances known and attempting to influence a political outcome, but also having to appeal to the voting public (now more than ever since there is an election looming). As we approach the election, we may see increasing efforts on the part of student leaders and organizations to frame their cause such as to be more appealing to regular voters, since there appears to be little evidence, as of yet, that voters have come to side with student activists in any significant way.