It is widely recognized that police and protesters compete for the moral high ground, as the iconic image from the US civil rights reminds us. 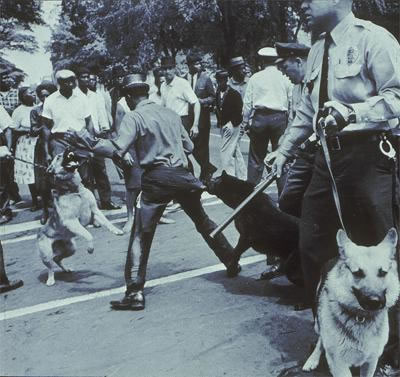 Christian Davenport and I have begun a Civil Society and Democratic Expression research initiative that we hope will serve as a model for how we should collect data so that we can better study the street politics of social movements. Matt Baggetta kindly posted about the “within the protest” street portion of the project, and we will post soon about our effort to also document the police deployment “behind the scenes” during large events such as the recent march and rally in Chicago organized by the Coalition Against NATO/G8 War & Poverty Agenda.

Because the street politics of protest can be understood as a competition between protesters and police to earn the moral high ground we believe it is vital to study not only the interactions of protesters and police on the street, but also the resulting press coverage and public opinion. While all of these aspects (protester activity, protest policing, press coverage, and public opinion) have received considerable attention, we are unaware of projects that unite all four aspects. Our Civil Society and Democratic Expression initiative does precisely that, and this past weekend in Chicago we rolled out our virgin voyage.

We assembled a small scraping team and also had an understaffed television news unit at work. Unfortunately (and perhaps wisely given Congressman Flake’s recent Amendment) the National Science Foundation did not support a request for funds to permit us to conduct a pre- and post survey in Chicagoland, so we will resort to sentiment analysis as an alternative. And I share two little bits from my email and Facebook feed to provide a feel for what that data might look like.

On FB a friend from middle school riffed on the type of image above as he took his dog on a walk past the Art Institute of Chicago, which was closed for two days as Michelle Obama hosted a dinner there.

On Sunday night I wrote my family about the day, and included the following:

It will be interesting to compare what gets reported with what I saw, and what I heard from others in our group (we went and ate in Chinatown after dispersing at 4:30, and thus ended up laughing and enjoying a meal while the Police beat folks down). At some level it is all rather surreal, yet at the same time incredibly predictable.

My brother, Geoff, replied as follows:

I watched it on TV Sunday – that same corner for about 2 hours (from the comfort of my family room) from about 4-6PM. All the while, I had no idea my brother was in the crowd. The front line got beat up a little and the cops had an interesting approach. Force their way forward for about 5-10 feet at a time cross checking with batons and shoving with shields. Then, they’d stop and rest for 5-10 minutes while being taunted by the protesters. Then take another 10 feet of territory, then rest, the push, then rest. After an hour they had moved the mob about 60 feet back very patiently and effectively without the mob really even realizing it. Eventually it got boring to watch and very repetitive. Hats off to Police Chief McCarthy (a total stud) and the entire Chicago Police Dept.

While the contrast between my views of the police response and Geoff’s is not especially strong, a well done sentiment analysis should be quite capable of distinguishing not only between the views of Rick and Jamie, but those of my brother and I as well.

Neither my Facebook feed nor my email will find their way into our scraping effort, and thus are just examples, but other sources of public exchange such as Twitter can be scraped. We expect to be able to demonstrate (in due time) that incredible opportunities for research exist. For example, to complete the loop and connect with news coverage, consider the usefulness of time-lines such as found in WGN’s Sunday NATO Blog Updates, which describes police protester interactions (via location) and records the time of the post. All aspects of any given effort (street, press, public) within our initiative will have time stamps (to the extent possible), and when one merges those different data sets a variety of interesting treatment (especially if one can conduct pre- and post-surveys). We plan to launch a project website in July that will contain recruitment and training materials, and as soon as we are able, raw data (i.e., well prior to any publication efforts of our own).

2 responses to “Studying The Public Response to Police & Protesters”