The North Atlantic Treaty Organization (NATO) will be holding a major summit in Chicago later this month. Where NATO goes, protest follows, and federal and city officials are apparently preparing for it.

But they aren’t the only ones. Social movement scholars are gearing up as well. Will H. Moore (Professor of Political Science at Florida State) and Christian Davenport (Professor of Peace Studies, Political Science, and Sociology at Notre Dame) are putting together a neat study of what the NATO summit protests and policing will look like. And they really mean what all of the protest and policing will look like–not just the big signs or lines of riot police or burning trash cans that typically end up on the evening news and the covers of newspapers. The basic plan is to train a set of observers who will watch a delimited area and record what they see at regular intervals. This will give them a fuller picture of what really goes on during the protests, apart from just the flashiest stuff that we’ll all see on the news. Here’s a screenshot from a Prezi presentation they’ve put together illustrating the approach: 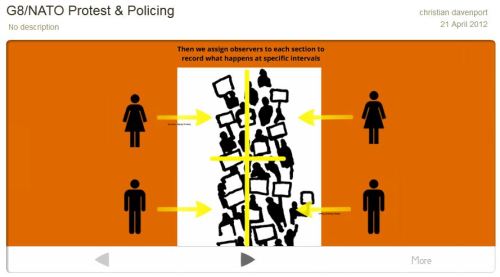 Of course, executing a research plan like this takes a lot of trained observers–and they’re in the process of recruiting some now. If you are an undergraduate student interested in social movements and who might be available to be in Chicago for the summit, check out the full presentation (don’t worry; it’s short); the contact information for Professors Moore and Davenport is at the end. If you know undergraduates who might be interested and available, spread the word! (Here’s a Tiny URL good for sharing: http://tinyurl.com/protpol).